When Kriti Kharbanda invited the sun into her van

Mumbai– Actress Kriti Kharbanda is the “sunshine girl” in a new photograph she shared with fans and followers.

Kriti shared a picture of herself on Instagram, where the sunrays fall her face, adding glow to it.

“When we invited the sun into my van 🙂 #beyourownsunshine#sunshinegirl #alwaysandforever,” she wrote.

She will next be seen in Bejoy Nambiar’s revenge drama titled “Taish”. The film is slated to release next year.

Mumbai– Actress and former beauty queen Urvashi Rautela urged everyone to be safe and said that “until real life doesn’t feel like a movie, cinema will remain closed.

Urvashi shared a throwback video of herself getting her hair and make-up done for what seems like an event or a shoot.

“Cinema closed until real life doesn’t feel like a movie. STAY SAFE. BE KIND. I LOVE YOU ALL GUYS. Stuck with you @yashrajrautela,” she captioned the image.

Urvashi, a social media sensation, made her Bollywood debut with “Singh Saab The Great” in 2013. She later appeared in films like “Sanam Re”, “Great Grand Masti”, “Hate Story 4” and “Pagalpanti”.

Recently, Urvashi talked about stray animals dying of starvation, and urged people to take care of them.

Urvashi had also donated Rs 5 crore to aid the fight against the coronavirus pandemic, and says we need to get together and no donation is too small.

Ileana took to Instagram and shared a stunning photograph of herself in a white cutout swimsuit.

“I miss the beach. @colstonjulian,” she captioned the image, shot by ace photographer Colston Julian.

She shared a few photographs on her Instagram Stories, where she posted a glass of wine and wrote: “A little me time.”

Recently, she shared a photograph of herself hugging her mother Samira D’Cruz and said that she’s a big cuddler.

Ileana took to Instagram, where she shared a photograph of the mother-daughter duo. In the image, Ileana and her mother are seen looking at the camera while hugging.

On the work front, Ileana will next be seen alongside Abhishek Bachchan in Ajay Devgn’s production “The Big Bull”, a film reportedly based on India’s biggest securities scam of 1992.

“The Big Bull” is slated to hit theatres on October 23.

Dia recently managed to enlist the support of her friends from the world of sports for a challenge started by the United Nations.

Called the ‘Keep It Up’ Challenge, the activity is aimed at creating hope and solidarity as many across the world are growing weary and tired of the social restrictions due to the pandemic.

The challenge is simple. All one needs to do is take a video doing a trick like bouncing, balancing, or keeping a ball or any other object in the air; then post it on social media and nominate three other friends to do the same.

“It’s very important to keep our spirits up during these trying times and sports have a very unique way of energising us. Honestly, all I had to do was send a message to my friends and they were more than happy to be a part of this campaign. I just hope it helps,” said Dia.

Nora Fatehi is done with year 2020

Mumbai– Actress-dancer Nora Fatehi says she is done with this year, in a hilarious new video she shared on Instagram Stories. 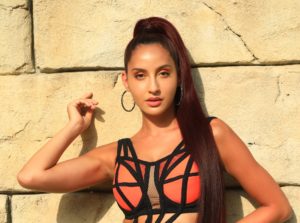 In the TikTok video, Nora is seen talking on the phone and heard mouthing the lines: “Hi. I am calling to quit. Can you tell me who I need to talk to? Yeah, I just want to quit it all. I want to quit everything. I dont wanna do any of this. Whoever I need to talk to make it stop. Please connect me.”

Nora will next be seen in the Ajay Devgn-starrer “Bhuj: The Pride Of India.”

Mumbai–Twenty-six years ago on this day, Sushmita Sen became the first Indian to be crowned Miss Universe at glittering ceremony in the Philippines.

“26 years My Jaan.How proud you made all of us and still continue to do so! #Mine. I love you @sushmitasen47 #bestmissuniverseever #amazingwoman #love #India #proudbf #indiasfirst,” Rohman wrote.

Along with it, he shared a few throwback pictures of Sushmita from the contest, in which she can be seen wearing a white gown and gracefully carrying the crown on her head.

Reacting to the post, Sushmita’s fans showered her with love and congratulatory wishes.

A user commented: “She is an epitome of positivity. Lots of love to her.”

Another one wrote: “A true inspiration.”

Currently, Sushmita stays with her boyfriend and her adopted daughters, Renee and Alisah.

Mumbai– Actress Seerat Kapoor knows how to achieve healthy weight loss without losing the glow on her face.

Due to the COVID-19 lockdown, the actress is working out at home and is making sure to maintain her fitness.

“My fitness regime is an amalgamation of Pilates and a balanced nutritional plan. I also train with EMS (Electro Muscle Stimulation) which is a 20-minute workout session twice a week. It is believed that one 20-minute session of EMS is almost equivalent to 3 sessions of strength training,” she said.

For her hourglass figure, she also gave credit to her trainer Samir Purohit and nutritionist Anjali Peswani who have “stood by me through thick and thin, as my army”.

“Prior to the lockdown, Samir sent me a guide with all the vital exercises, tailor made for my body type due to which I have been able to maintain the years of efforts, despite working out from home. I oscillate between his videos and digital workout classes with Namrata Purohit,” she said.

Apart from this, she believes that taking to house cleaning is a great source of functional training. (IANS)