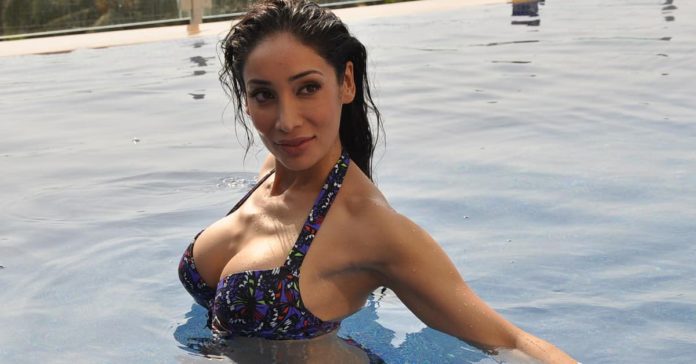 Mumbai– Former “Bigg Boss” contestant Sofia Hayat raised a storm on social media by posting pictures where she poses in the nude before the sacred Om symbol. Now, the self-proclaimed “Goddess” defends herself saying all the criticism coming her way is “a form of witch-hunt”.

Sofia got herself in trouble when she posted a nude picture of herself bowing down before the holy symbol. She faced widespread flak for the move. According to republicworld.com, a legal complaint was lodged against her for hurting religious sentiments.

She took a dig at the situation by posting a nude shot of herself with the caption: “I am Goddess!! I would have shown you beautiful breasts and nipples, but some people are offended with naked Goddesses!” With the post, she used hashtags, #freethenipple #goddess #divinesofia.

As further criticism poured in, she responded with a video on Instagram.

“I feel I have to make the video because this is escalating. I am super sad because there are those who don’t recognise me as an incarnation of Goddess Isis, Female Christ. That is okay but I am an enlightened being and I have gifts,” Sofia said, before claiming that a member of the Indian media saw her gift by witnessing her “inside a shiv ling (lingam)”.

“When Buddha has the swastika at his feet, it is okay. But when I do, some of you have issues about it. You need to understand that the divinity is working through me and quite frankly your naivety, naivety of people who are doing this, is a form of a witch hunt,” she added.

She continued: “It is like what they used to do in the past when women with power rose up, they killed them. Like Jesus Christ. He rose up and they killed him. They chased Mary for years. Why do you think I am any different?” She claimed she feels sorry for “such people”.

“You are fighting so hard for something which is pure divinity and trying to bring it down, rather than bringing down things that need to be brought down, like people promoting pornography. I have nothing more to say. If Instagram and Twitter listen to you, then they are putting a hand over the mouth of every women,” she added.

Sofia also shared a message that was apparently posted by someone she describes as “one of my educated beautiful soul fans”.

The message read: “Lot of people are abusing you.. What they (are) doing is their nature. Be always calm. Even the book Kundalini yoga says Maa Kali is naked. Even Naga sanyasi and Aghoris are naked. They are doing tantrik methods. In tantra, there is a chapter explaining attain enlightenment through sex. That’s why Kaali is represented by sex by lot of others. Saffron and brightness in your body is a reflection of your soul.”

Sofia shared the message with a caption: “One of my educated beautiful soul fans just sent me this!! This is the true Hindu texts that give liberation!! Do not listen to those who swear and shout and threaten, for they work for evil.”

“It is their job to slam down the truth!!! That is why they are angry and use vile words!!! Those who speak softly with love.. speak with truth and divinity!!! Even I have not got angry for this, because I know the truth and I know love and I know the divine force within me,” she added. (IANS)