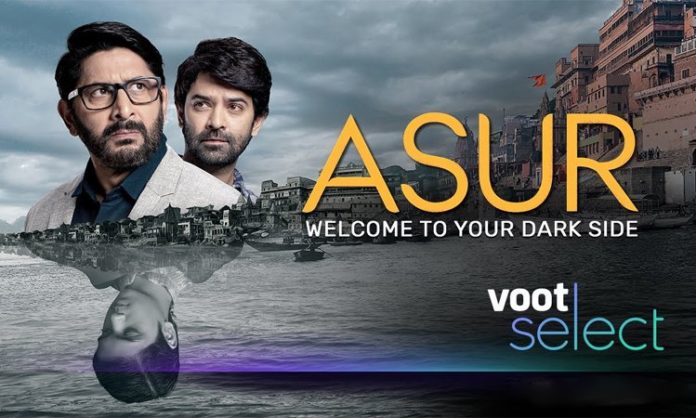 “Asur” takes some time to get on with its quota of thrills, but the series does a fairly good job in setting up and sustaining an unusual tale of gritty, and often gruesome, drama once it gets going. The show mixes mythological mystique with a twisted psychological edge to serve dark, enjoyable suspense over eight episodes.

Creator Gaurav Shukla and his co-writers Vinay Chhawal and Niren Bhatt have toyed with the concepts of science and spirituality to craft a modernday crime thriller. The team of creators is impressive in the way they maintain suspense through the storyline, teasing and laying bare bits of mystery by turns at the right turns of the story.

A spate of grizzly killings is on, and the serial killer seems to relish leaving clues to challenge the investigators. Former investigating officer Nikhil Nair (Barun Sobti), now a teacher at the FBI headquarters in Washington DC who leads a quiet life with his wife (Anupriya Goenka), starts getting signals from the killer on phone. Nikhil must naturally return to India and join his former boss at CBI, Dhananjay Rajpoot (Arshad Warsi), to take a shot at the case that seems to be getting murkier with every new turn.

“Asur” is cleverly written, and it takes an unconventional look at the notion of evil as we have always known it. Debutant director Oni Sen has tackled the complexities of a layered storyline well, although on the rare occasion giving in to the lure of generic tropes.

A highlight of the immensely watchable series is Arshad Warsi. Not since the gritty cop drama “Seher” way back in 2005 has Warsi managed to bag a well-penned role that lets him emerge beyond his Bollywoodised image as a funnyman. In Dhananjay Rajpoot, Warsi gets a character that lets him balance the perceptive and the vulnerable streaks, and the actor essayes his protagonist with understated relish. Along with Barun Sobti’s effectively-executed Nikhil Nair, Warsi strikes up perfect on-screen drama to backdrop the action.

Most of the cast makes best use of fine writing. A special mention, in this context, should be made of Vishesh Bansal, as the teenager Shubh – who is certainly the script’s joker in the pack.

Good writing is also the reason why “Asur” is simply outstanding when it comes to setting up a milieu. The series is seriously eerie in most parts, and it is surely credible to create such an impact within the contained scope of a web series.

Here’s hoping the show is back with season two soon. (IANS)