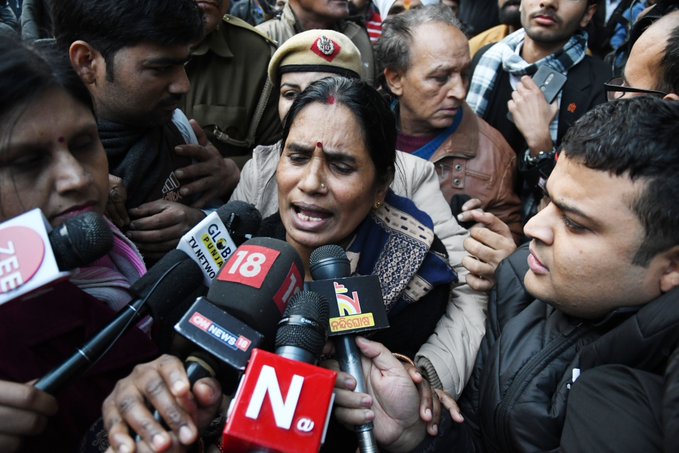 New Delhi–“Before dying, Nirbhaya had asked me to ensure that her rapists should get such a punishment that this crime was not repeated ever,” Nirbhaya’s mother, Asha Devi, said on Thursday after the court directed four death-row convicts in the case to be hanged on March 20 at 5.30 a.m.

This was the fourth time that their death warrant was issued.

Additional Sessions Judge Dharmendra Rana, in an order earlier in the day, directed the four convicts “to be hanged by neck until they are dead” on March 20 at 5.30 am.

Asha Devi, who has been fighting for justice for her daughter for the last seven years, said, “While dying, Nirbhaya had asked me to ensure that the rapists get such a punishment that this crime is not repeated ever.”

Her 23-year-old daughter was gang raped by six men in a moving bus in the most brutal manner possible. The rapists inserted rod into her and even butchered her intestine on December 16, 2012.

They then threw her and her man friend by the road side. By the time she was discovered by people on the road, her condition was beyond critical. The victim had several surgeries and finally breathed her last in a Singapore hospital on January 29, 2013, following severe complications.

Nirbhaya’s mother added: “The morning of March 20 will be the morning of my life. If there is any chance, I would like to see them die.”

Asha Devi promised to not to quit until her daughter’s killers were dead. “The hanging has already been deferred thrice. I will be satisfied only when they are hanged by the noose.”

The hanging was earlier deferred thrice. The four convicts — Vinay, Akshay, Mukesh and Pawan were scheduled to be executed on March 3 at 6 a.m. but the court deferred it till further orders on the grounds that Pawan’s mercy petition is pending.

The court had on Wednesday issued notice to four convicts on an application moved by the Delhi Government and Tihar Jail authorities seeking issuance of fresh date for their execution shortly after President of India Ram Nath Kovind rejected Pawan’s plea for pardon.

Pawan was the only convict whose legal remedies were pending till the last date of execution. All the others had exhausted their legal and constitutional remedies.

During the course of proceedings on Thursday, Additional Public prosecutor Irfan Ahmed told the court that since all the legal remedies have been exhausted, a fresh black warrant can be issued against them.

Advocate A.P. Singh, appearing for convicts, however rebutted and sought more time to interact with his clients.