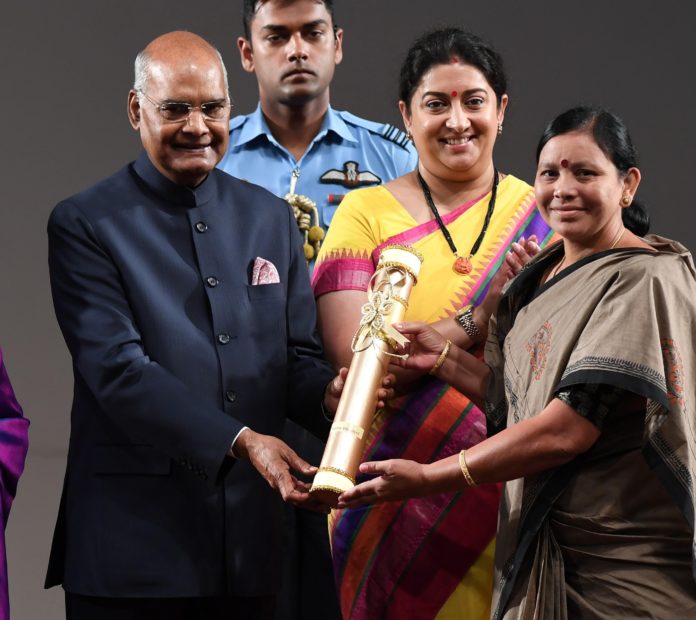 Visakhapatnam–Padala Bhudevi, who received the “Nari Shakti Puraskar” from President Ram Nath Kovind on the International Women’s Day, is working for women empowerment among tribals in north coastal region of Andhra Pradesh.

Hailing from Srikakulam district and belonging to Savara tribe, she helped many tribal women in developing entrepreneurship.

Bhudevi is seen as a role model by women farmers and rural women entrepreneurs in the region.

She has been doing exemplary work through a community-based organization Chinnaya Adhivasi Vikas Society (CAVS), which was established by her father, in 1996.

Chinnaya, a resident of Seethampeta, had formed the organisation to help the people especially farmers suffering due to missing land documents, land grabbing and other issues.

He helped people through awareness and coordination between the authorities and the parties.

His daughter Bhudevi, who was married at the age of 11 years, had to face mental and physical torture from husband and in-laws over birth of three daughters.

Abandoned by husband, she returned to her parents’ house in 2000 with three daughters and started working as a daily wage labourer.

On her father’s advice, she became active in his organisation, then called Adivasi Vikas Trust. Fighting all odds, Bhudevi not only raised three daughters but also successfully motivated women to participate in agri-entrepreneurial activities.

After the death of Chinnaya in 2007, she steered the organisation and changed its name toAChinnaya Adivasi Vikas Trust.

She started living with women in different villages to closely interact with them, know their problems and try to solve them.

Not confining herself to only land and livelihood issues, she started focussing on problems like lack of basic amenities, potable water, health awareness and education.

Bhudevi coordinated closely with the government and the Integrated Tribal Development Agency (ITDA) to create awareness among women.

Her efforts started yielding results as authorities focussed on the problems, especially health. They worked to create awareness on nutrition.

It was during this work that she realised the need collect and grow traditional seeds to ensure both good nutrition and higher income for the tribals.

She collected the traditional seeds from families in various villages and embarked on their preservation and transplant. As a result of this several families had access to the traditional varities with higher nutritional value.

According to Bhudevi, they collected more than 125 variants of seeds from the farmers and took steps for their cultivation. Millets are the core area of her work.

She along with her team also worked on the processing and marketing of forest produce.

The group also makes Neelammatalli Millets biscuits which are supplied to 47 hostels.

Bhudevi is also working on henna, which is abundantly available in the reserve forest area. The NGO has trained 30 women in making mehendi cones and hair-care products with it.

In 2013, she visited China to study how they were cultivating grains. She also visited the Netherlands to know about their farming techniques. (IANS)