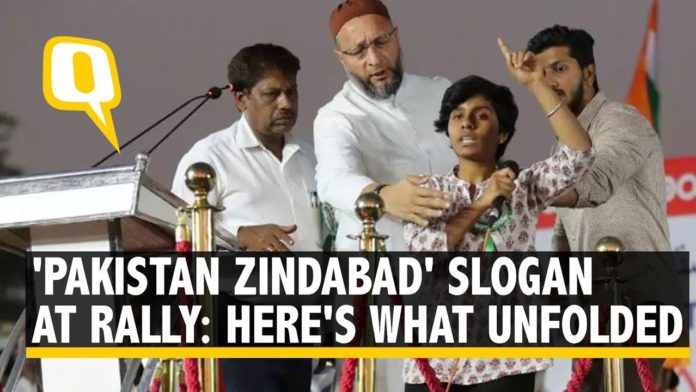 Bengaluru–The father of Bengaluru girl Amulya, who was arrested and jailed on sedition charges, on Friday condemned his 19-year-old daughter for shouting pro-Pakistan slogans at an anti-CAA rally a day ago here.

“I condemn Amulya for shouting pro-Pakistan slogan at the rally and disown her views on CAA, NRC or NPR. I was not aware about her act till a friend called and told me about it last (Thursday) night,” Oswald Noronha told a local news channel from his home at Koppa in Karnataka’s Chikkamagaluru district.

Noronha also alleged that he was forced to chant “Bharat maata ki jai” by Bajrang Dal activists who barged into his house earlier in the day and vandalised it.

Earlier in the day, Amulya was sent to 14-day judicial custody after police arrested and produced her before a local magistrate in a sedition case, filed suo motu against her.

Noronha said: “I also advised her not to criticise Prime Minister Narendra Modi and Union Home Minister Amit Shah for enacting the CAA. She does not listen to us. She has gone out of our control. I am sad and unhappy that she got into trouble for her views.”

“I told her not to talk in that manner on several occasions,” Noronha recalled.

Distancing from Amulya’s social and political activism, Noronha told a Kannada news channel that his daughter should rot in jail and police should break her bones.

According to media reports, Noronha was an environment activist who participated in Appiko Chaluvali, a southern version of the Chipko movement that was started by Pandurang Hegde in 1983 to save trees in the rich bio-diverse Western Ghats region in the state.

On the Bajrang Dal attack, he said: “I agreed to repeat whatever they asked me to say only to save myself and my house from being further damage.”

Noronha filed a complaint with the police against some unidentified BJP activists for allegedly attacking his house at Koppa for Amulya’s pro-Pakistan slogans.

“The activists vandalised our house, smashed window glass panes and flower pots and damaged furniture,” Noronha said in the complaint.

The local police provided security to Noronha’s house as he was staying alone after his wife shifted to her parents’ home, fearing more attacks by right-wing elements. (IANS)