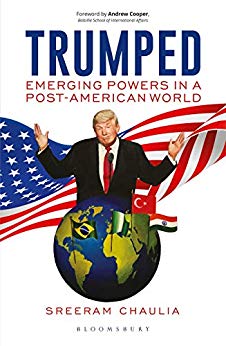 New Delhi– Emerging powers like India have the best chance in contemporary history to rise up as great powers as the US pulls back from its role of a global policeman but they must have the apt political leadership at home, says a new book on the first three years of the Donald Trump presidency.

“India, Turkey, Brazil and Nigeria have national identities based on exceptional narratives and self-conceptions of special or chosen nations that have to play a grand leadership role in their regions and the wider world. But these upcoming powers cannot afford to be narrowly nationalistic at this juncture in their evolution,” writes Sreeeram Chaulia, an eclectic political scientist specialising both in international security and the international political economy in “Trumped – Emerging Powers In A Post-American World” (Bloomsbury/pp 239/Rs 799).

Noting that regional and broader South-South cooperation are the building blocks for emerging powers to escape the fate of bandwagoning with one or the other great powers, Chaulia states that With Trump’s US “in retreat, Western liberals have sounded alarms of a clear and present danger of China filling in America’s shoes and taking over whole regions under its vassalage. But this transfer of hegemony from Washington to Beijing can be averted by emerging powers if they consolidate their respective regions under their leadership and form wider networks with other emerging powers”.

“Emerging powers have the best chance in contemporary history to rise up as great powers because Trump is pulling the US back from its habitual internationalist and interventionist role…(But) rising nations can only seize this moment if they have the apt political leadership at home,” writes Chaulia, Professor and Dean, Jindal School of International Affairs (JSIA) at the Jindal Global University (JGU) at Sonepat.

Politicians like Recep Erdogan and Jair Bolsonaro do not bode well for Turkey and Brazil to fulfil their manifest destinies. India’s Narendra Modi and Nigeria’s Muhammadu Buhari, on the other hand, “are safer bets because they appear to understand the historical moment we are in and have the foresight to sagaciously chart their countries’ ships to glorious shores.

“But Modi is pushing 70 in age and Buhari is in his late seventies. They are heading countries where the average ages are 29 and 18 years. Nations endure while leaders come and go. The will to lead and the urge to serve region and world have to be institutionalised in the youthful societies of emerging powers. They have long voyages ahead with many ups and downs. But the good news is that Trump has set the platform nicely for a multipolar world,” Chaulia writes.

In this context, he notes that Modi’s India First ideology “is quite distinct from Trump’s America First. In New Delhi, putting one’s national interests first means standing up to extra-regional great powers like China or the US when they act to repress India’s rise, and unifying South Asia and the Indo-Pacific through provision of regional public goods and endogenous collective security”.

The book has a word of caution for the emerging powers: They must be accommodative and magnanimous in asserting their leadership within their regions. Taking one’s backyard for granted is a strategic blunder.

For instance, the “erroneous path” taken by Bolsonaro’s Brazil to ingratiate itself with the US and turn its back on South-South cooperation. “Bandwagoning with an unreliable and uncommitted great power like Trump’s US and extricating Brazil from its former role as a star of South-South integration amount to Brazil hacking at its own feet,” the book states.

And, Turkey’s Erdogan “overplayed his hegemonic hand” with Arabs and Persians in the Middle East through military misadventures and “paid the price by losing the legitimacy and acceptability to have a say in shaping the region’s economy and security”.

On the other hand, Nigeria “has infinitely greater capabilities than any other West African state and has only South Africa as a peer on the African continental level. Pax Africana cannot be brought about by a Ghana, Kenya or Ethiopia – weaker states with lesser endowments than Nigeria or South Africa”, the book points out.

Chaulia also notes that Indian-Canadian scholar Amitav Acharya observation in 2007 that “Regions are constructed more from within than from without” is more valid in today’s ‘Trumped’ environment than in earlier periods when the US immersed itself in shaping regions to serve the grand American strategy of counterbalancing illiberal rival states”. (IANS)