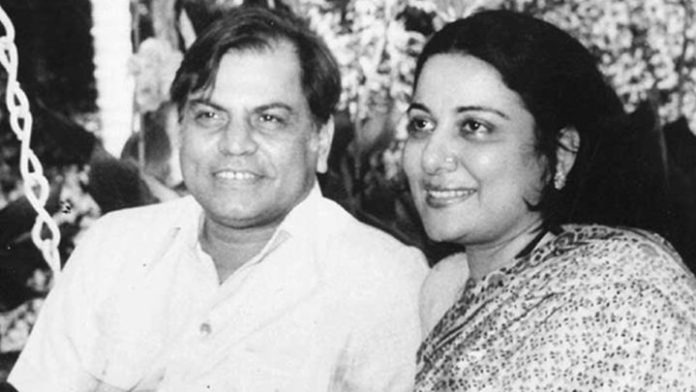 Mumbai–Nearly seven decades after her parents “lived” the love-story of their youth through an exchange of letters, their doting daughter has now published those communication in a book form.

The letters were written by legendary Maharashtra political leader and former Chief Minister and Union Minister, Abdul Rahman Antulay to his home-maker wife Nargis – during their “bethrothal” of four years when she was just 14 and he was all mature at 28 – and also later on after their marriage in May 1959.

Eldest daughter Neelam Mushtaq Antulay had to carry out some major jobs before she could finally compile and create an Urdu and a Hindi book – “Banaam Nargis (‘To Nargis’)”.

First she had to convince her mother to part with them and later painstakingly sift through hundreds of pages of great emotional churning.

“Banaam Nargis” will be released on Saturday at a mega-event by Nationalist Congress President Sharad Pawar and Leader of Opposition in Rajya Sabha Ghulam Nabi Azad, while Chief Minister Uddhav Thackeray will rename the prestigious Anjuman-I-Islam law college in south Mumbai as “Barrister A. R. Antulay College of Law”.

“‘Banaam Nargis’, a collection of entirely personal letters written from a loving boy to his beloved fiance during the conservative era, were more than merely love-letters,” said Neelam.

“I remember from my childhood, how my mother, who treasured a majority of these handwritten letters, (with a fountain pen) — would quietly take them out, read, again and again with a myriad emotions lighting or clouding her face, even after he passed away in December 2014,” Neelam told IANS in a free-wheeling chat on Friday.

“This got me thinking… Why not highlight my Abbu’s letters to my Ammi? But it took me mountainous efforts to convince my mother before she finally relented over two years ago.

“Today, I consider it my humble tribute to my parents…” Neelam said.

After Nargis parted with her “treasure”, Neelam got down to reading them — around 300 — and many more which she kept aside without even reading, as they were ‘intimately personal’ though her Ammi now had no reservations!

“The letters are clear, concise, to the point.. he wrote prolifically, mostly daily, at times twice daily and posted them… From his bachelor home in Mumbai and Raigad to her parents’ home in Bhiwandi (then called Bhimdi, Thane), unveiling a different era of their lives…,” Neelam says with a heavy heart.

To a query, she points out that “of course, there was a lot of romance” but there was also a lot more.

“He shared with her practically everything… His joys and disappointments, achievements or failures, the highlights or downsides of his blooming legal career after he returned as barrister from Lincoln’s Inn, London, his maiden speech in public life with luminaries like Pandit Jawaharlal Nehru and others present… It opened up a whole new world of my father which I never knew,” said Neelam.

In his inimitable style, Antulay would recount many incidents, anecdotes with references to the then prevalent social, cultural and political events and conveyed a lot more than what he wrote of what was in his heart and mind.

“Though during their engagement, my mother was too young and many things were beyond her comprehension coming from a highly qualified barrister, but today I understand why she keeps opening the trove to read them again and again,” says Neelam with a smile.

However, Neelam said that her mother was very less “reciprocal” and barely may have replied averaging to 10 per cent – probably one for every 10 letters from her besotted husband!

“But he was never offended and both enjoyed their life, loved their children and brought us all up with dedication and care… Surprisingly, my mother revealed that one day, she destroyed all the letters she had written to him!” said Neelam.

Surprisingly, she is the first member of the family allowed by Nargis to read the letters, described by an editor as “pearls of words and wisdom”.

The earliest of the letters were written by Antulay on 20-10-1957 from ‘Bambai’ (Bombay, now Mumbai) to ‘Bhimdi’, and the last of it was penned by him to Nargis on 22-10-1961 to ‘Bambai’ from London where he was part of a Congress Party delegation.

“I have mostly tried to transliterate the letters in Hindi to retain the special flavour… They are best read in Urdu, followed by Hindi, but any suggestions to translate them in English would kill their very essence,” she laughed.

Neelam is confident that most people “will fall in love with my parents” and learn a lot about life after reading these letters in ‘Banaam Nargis’. (IANS)