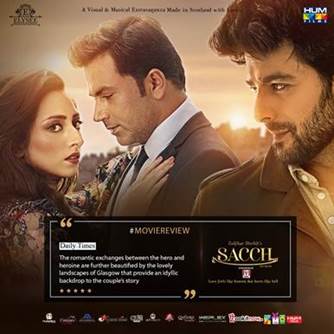 Sacch opened to raving reviews in the UK on Friday.

The film is scripted by award-winning Bollywood screenwriter Kumud Chaudhry, with dialogues by the celebrated Pakistani playwright Haseena Moin, highlighting the amalgamation of the Pakistani and Indian film industries on one cinematic canvas.

The film boasts of an eclectic range of music directed by Bollywood’s Simaab Sen with talented lyricist Fatima Najeeb penning the songs. A host of popular Indian and Pakistani singers have lent their voice to the movie such as legendary Pakistani singer Rahat Fateh Ali Khan, Indian singing sensation Armaan Malik, with supporting vocals by Elysee Sheikh.