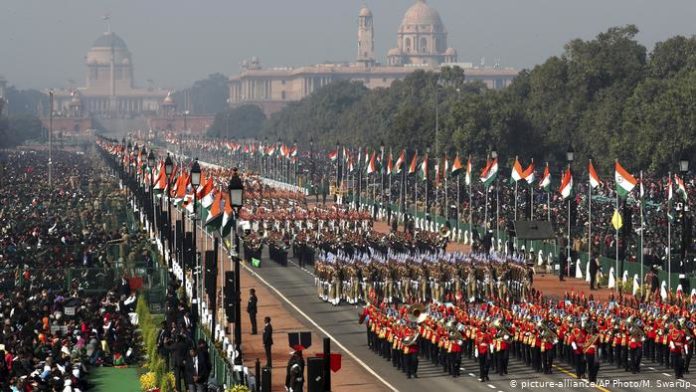 New Delhi– The 71st Republic Day parade on Sunday showcased India’s cultural diversity as well as military prowess with many firsts as hundreds of men, women and children donning thick woollens braved the morning winter chill to watch the annual ceremony at Rajpath.

A blanket of thick fog that engulfed the city in the morning and tight security restrictions could not deter the enthusiastic crowd from venturing out to gather at Rajpath, literary ‘King’s Way’ – a ceremonial boulevard that runs from Rashtrapati Bhavan on Raisina Hill to India Gate.

The parade, a showcase of an impeccable display of might by the armed forces and India’s soft power, this year had many firsts to its credit.

Sporting a saffron turban with a long free-flowing end, Prime Minister Narendra Modi received Brazil President Jair Messias Bolsonaro as the chief guest for the first time at the ceremony. However, this was the third time that a Brazilian president graced the Republic Day parade. Previous instances were in 1996 and 2004.

The who’s who of the government, including President Ram Nath Kovind and Defence Minister Rajnath Singh were seated when 22 tableaus – 16 from states and union territories and the rest from various ministries and departments – took part in the majestic parade at Delhi’s Rajpath.

Breaking from tradition, Prime Minister Modi for the first time paid tributes to the country’s fallen soldiers at the National War Memorial, instead of Amar Jawan Jyoti, ahead of the majestic parade at Rajpath.

Previously, the wreath laying ceremony followed by a salute by dignitaries during Republic Day was held at the Amar Jawan Jyoti, located under the arch of India Gate.

After the Prime Minister laid the floral wreath at the National War Memorial, the President unfurled the National flag and the National Anthem was played with a booming 21-gun salute.

It was the first Republic Day ceremony in which newly-appointed Chief of Defence Staff (CDS) General Bipin Rawat took part.

The CDS along with Defence Minister Rajnath Singh, Minister of State for Defence Shripad Yesso Naik, the three services chiefs and Defence Secretary Ajay Kumar were standing behind the Prime Minister according to protocol.

Another first, and a thrilling one at that, was the sight of women officers of the Central Reserve Police Force riding 350 cc Royal Enfield motorcycles, performing acrobatics and daredevil stunts with panache along the Rajpath.

In its debut show at 71st Republic Day, the contingent was commanded by Inspector Seema Nag, who is posted with the Rapid Action Force (RAF). They displayed several acts of daring bike riding and concluded by forming a human pyramid on multiple motorcycles.

In yet another first on giving adequate representation to women in the ceremony, Captain Tania Sher Gill, an officer serving with the Army’s Corps of Signals, led an all-male marching contingent during the parade.

Although Gill is the second woman to do this, she was the first woman officer to lead an all-male marching contingent during the Army Day parade on January 15.

The Dhanush artillery gun and the anti-satellite missile system was part of the Republic Day parade for the first time this year in a show of military strength which also included Anti-Satellite Weapons (ASAT) from ‘Mission Shakti’.

The other two armaments displayed for the first time were the 5-metre Short Span Bridge System and the 15-metre Sarvatra Bridge System.

Newly-inducted Chinook heavy lift and Apache attack choppers were displayed for the first time during the parade at the Rajpath at the grand finale, the most keenly awaited segments of the parade.

‘Trishul’ flypast was carried out by three Advanced Light Helicopters. This was the first time a tri-service formation took part in a Republic Day parade. This was followed by the ‘Vic’ formation of Chinook helicopters, used for airlifting diverse loads to remote locations, Sukhoi formation and Flanker formation.

Also marching for the first time in the Republic Day parade was the contingent of the Corps of Army Air Defence. It was followed by the Combined Band of Bengal Engineers Group and Centre, Brigade of Guards Training Centre, 3 Electronics and Mechanical Engineers Centre and Madras Regimental Centre.

After the event concluded, the Prime Minister walked down a few metres along Rajpath — like he did last year — waving towards the crowd.

Around the parade venue, the city had literally turned into a fortress with special security teams, anti-aircraft guns and snipers deployed to keep a vigil on the eight-km path from Rajpath to Red Fort.

Hundreds of CCTV cameras and drones kept a close watch on people’s movements along the route. Nearly 60,000 security personnel from Delhi Police and central security forces were deployed in central Delhi. (IANS)