HOUSTON, TX- Close to 250 people gathered at the steps of City Hall in Sugar Land, TX to commemorate the 30th anniversary of the Kashmiri Hindu Pandit community’s exodus from their homeland in Kashmir, India.

This tragic event was recognized by a candlelight vigil jointly organized by the Hindu American Foundation, Indo-American Kashmir Forum, and the Hindus of Greater Houston, as part of a series of vigils done around the U.S. to mark the infamous day. Also joining were Congressman Pete Olson (R-TX) and Fort Bend County Judge K.P. George (D), who heard from members of the Kashmiri Pandit community tell the stories of what happened on January 19th in 1990.

After the program started with a prayer, emcee Dr. Neel Bhan, a second generation Kashmiri Pandit, introduced Suraj Pandit, a third generation Kashmiri Pandit and local high school junior, who told the assembled crowd the history of what happened to the Kashmiri Pandit community. Suraj stated that on January 19, 1990, “terrorist-driven violence, rape, torture, and murder led to the forced exodus of my relatives and 350,000 other Hindu Pandits from our homeland in our former ‘Paradise on Earth’.”

The next two speakers, Anjali Raina and Sunita Ticku, lived through the events of that fateful day, and told their stories. Anjali bravely recounted “the tortuous death of my father at the hands of terrorists” and the severe effect his passing had on her family. Sunita Ticku told the story of how terrorists barged into her family’s house, looking for her father, a government official, and ended up “shooting everybody they could find in the house.” Her grandmother survived that assault after being shot three times in the abdomen – Sunita and her siblings survived only because they had been sent away earlier in response to constant threats by terrorists inciting the “infidels” to “convert, die, or flee”. 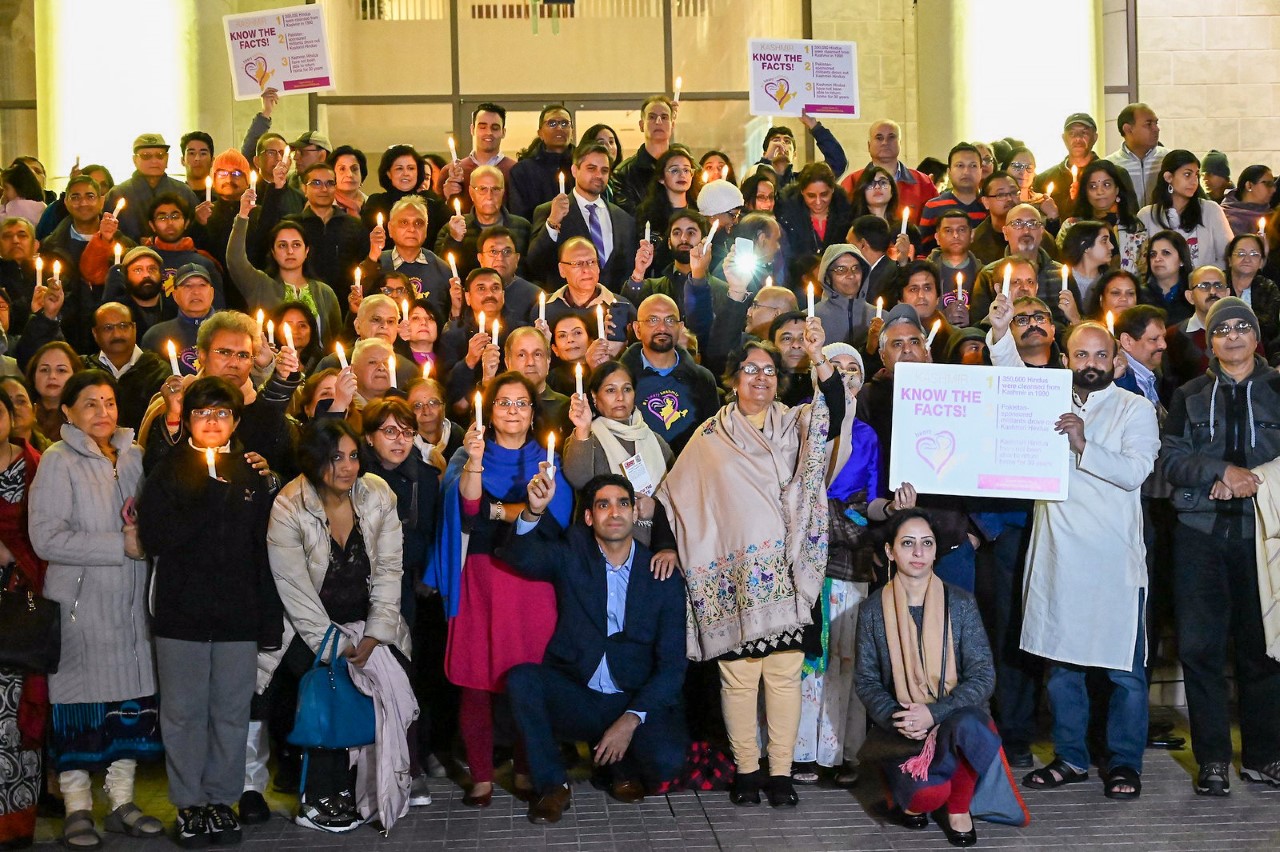 Congressman Olson then came up to speak. He gave an impassioned speech about the Kashmiri Pandits and the horrors that happened to them, and validated the government of India’s revocation of the oppressive Article 370. He noted that the “amount of people that fled their homes due to radical terrorists was equal to three Sugar Land, Texases.” Olson concluded by saying that the community should “never stop fighting” to go back home. County Judge K.P. George recounted how he heard of the events of January 1990 as an American of Indian descent. He himself had not realized the depths of what had happened, and said he was grateful for this vigil to be organized, so that he and others could learn what had happened. He also presented a proclamation recognizing January 19th, 2020 as “Kashmiri Pandit Exodus Recognition Day” in Fort Bend County.

After the speeches, the assembled crowd held their candles up high in the air as they heard a traditional Kashmiri bhajan (devotional song). Neel thanked all in attendance for coming and said “it means the world for the community to be recognized after so many years of struggle and invalidation.” He concluded by thanking the Houston community and asking everyone to support the Kashmir Pandit community in their struggle to keep their identity alive and “garner a presence back in the Valley of our homeland.”

Rishi Bhutada, HAF Houston Chapter coordinator, said, “I was proud to see so many people come out on a cold Houston evening to participate in the vigil and hear these first-person stories of suffering. We will continue with our advocacy, because this is history that must not be ignored by the world at large.”

Rahul Pandit, past president of Indo-American Kashmir Forum, said, “”We truly appreciate the support from the large group of attendees and elected officials in recognizing this day and somber anniversary of our community’s exile from our homeland. We feel the world is finally listening to our story.”