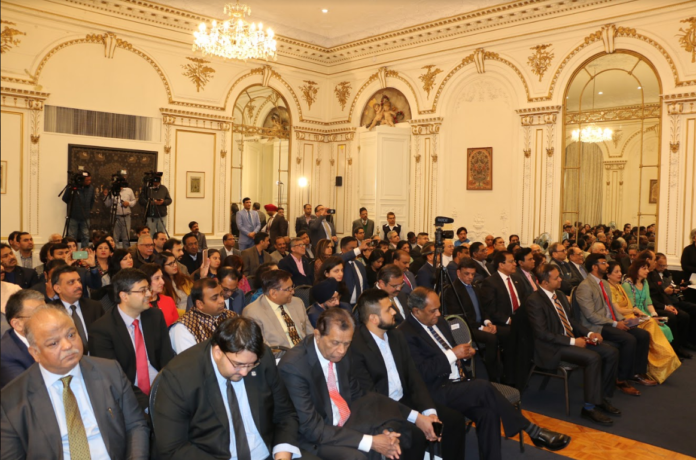 NEW YORK, NY–New York was one of the eight stations selected by India’s Ministry of External Affairs for celebration of Global Pravasi Bharatiya Divas (PBD) on Thursday, January 09, 2020.

On this occasion, S. Jaishankar, External Affairs Minister (EAM), addressed the Indian
diaspora and interacted with the Indian community through video conferencing located in
Consulate General of India, New York, selected for the interaction with EAM.

The interaction began with the EAM paying tribute to the late Smt. Sushma Swaraj by
recognizing her unique contribution and tireless work for the Indian diaspora and those
working and traveling abroad. EAM also emphasized the role of the 30 million Indians
living in various countries around the world and how their contributions have enhanced
India’s standing in the world.

After his initial remarks, EAM has interacted with members of India diaspora. Each
selected Mission was requested to ask two questions to the EAM.

Mr. Vivek Patel asked that, “How can we transfer charitable donations from members of
Indian Diaspora to India? Is it possible for Indian Embassy or Consulate to facilitate this
transfer of donations to India? We have been facing several hurdles in doing so”.

Replying to this question, EAM conveyed that as of now the best and safest way to transfer any  donation to India is through the Indian Embassies and Consulates. He also added that, he will discuss this matter with Ministry of Finance for availability of better option in future.

Thomas Abraham asked that “Government of India has taken several steps to
reach out to Indian Diaspora overseas. However, there is lot of misperception and
misunderstanding about the Sikh community abroad? Can you please elaborate on what
steps Government of India is taking to address the issues related to Sikh community?” To
which the EAM replied that– Government of India has no misperceptions about the Sikh
community, they are extraordinary intelligent, hardworking and patriotic Community in
India and abroad. He praised the community and highlighted various initiatives taken by
Government of India such as issue Passport and Consular services to political asylees of
Sikh origin as well as their family members and removing hurdles which prevent them to
visit India.

The EAM also highlighted the recent steps taken to preserve the sanctity of the
Sikh faith such as restoration of the historic town of Sultanpur Lodhi, worldwide
celebrations on the occasion of 550th Birth anniversary of Guru Nanak Devji being
organized by Missions and Posts abroad, new train which runs across the historic places
linked to Guru Nanak Devji, development of the Kartarpur Sahib Corridor etc. He also
assured that present Govt. is committed to bring perpetrators of atrocity of 1984 to Justice.
Some cases of 1984 anti-Sikh riots which were closed have now been reopened and reinvestigated. Govt. is also looking at the aspect of compensation as well as extending legal aid to the affected people of 1984 violence.

Followed by interaction with EAM, Consulate General organized a PBD
celebration in which twenty one individuals from various organizations/fields were
recognized for their outstanding service to the community.

More than 110 prominent members of the Indian diaspora attended the event.