You promised yourself you were going to knock off your holiday shopping list once and for all on Black Friday. That’s when the best deals and sales are available, anyway. But you didn’t. And now it’s mere days before Christmas, and that Artie 3000 coding robot you’d been eyeing for your niece is suddenly out of stock, leaving you desperately scanning a wall of… gift cards.

Relax. Not only are you not a thoughtless gift-giver, but it is possible that your niece will appreciate a Starbucks gift card as much as owning her very own robot.

As it turns out, seemingly impersonal gifts, such as gift cards, are received better than you might think, says Mary Steffel, an assistant professor of marketing at Northeastern who studies consumer judgement decision-making. 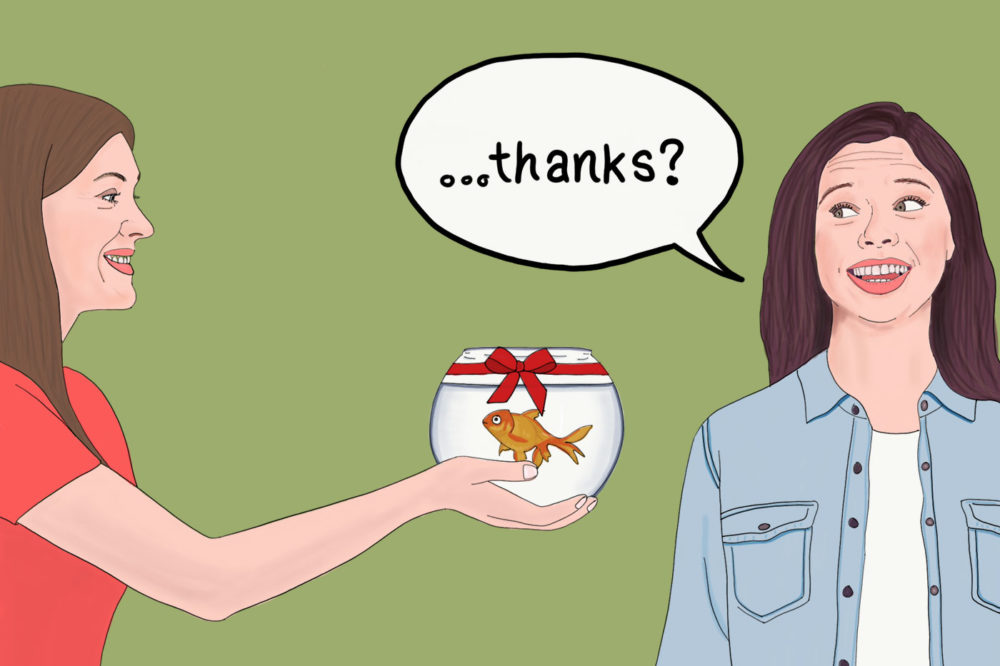 So you can ignore much of the gift-giving etiquette you find yourself weighing every time you set out in search of the perfectly tailored gift for that special someone. Go ahead and stock up on Visa gift cards. Behavioral science research proves you’re not being rude after all.

There’s what you think makes a good gift. Then there’s what the recipient actually wants. They’re not always the same thing.

When it comes to gifts, there’s often a mismatch between the giver and the recipient, says Steffel. Here’s why. Through the act of giving, well-meaning givers will typically try to convey to recipients how much they mean to them. At the same time, they want to prove to themselves how important the relationship is, and they want to show recipients how thoughtful they were being in picking out the gift. So what do they do? They spend hours—days, even—searching for the right gift.

“This is all well and good, but it can sometimes lead givers astray because the kinds of gifts that recipients prefer don’t always match the things that gifters think are going to be the most thoughtful or the most socially connecting,” says Steffel.

What’s more, givers will tend to look for gifts that will elicit the best reaction from recipients in the moment that they open it, but those gifts don’t always lead to long-term satisfaction. On the other hand, gifting something more practical, such as a vacuum, say, might not cause college students to jump for joy, but they will appreciate it every time they use it, says Steffel.

Your co-worker probably appreciated your gift more than your sister did.

Maybe your sister asked for cash, and remembering her incessant complaints about how run-down she’s been feeling lately, you ignore her request and get her a gift card to a spa instead. Look at you, you just proved you can be way more thoughtful than she gave you credit for. Wrong, says Steffel. It’s likely that the card will end up sitting in a drawer somewhere, never to be used.

“It’s funny, you’d think we’d be better at giving gifts to people that we know the best, or that we care the most about pleasing, but oftentimes those are the gifts that we overthink,” she says. “In our efforts to be thoughtful, we often end up ignoring what they’ve explicitly requested in favor of getting them something that we came up with ourselves.”

But, you can bet that $50 American Express gift card to your colleague, Steve, was a big hit. That’s because Steve’s not thinking about how little thought you put into his gift; he’s thinking about how he can spend the card however his heart desires.

“You see the biggest mismatch then for the people that you’re closest to,” says Steffel. “Givers are getting these highly specific gifts; recipients are wanting something more flexible. Whereas, if they are getting a gift for somebody that they’re more of an acquaintance with, somebody that they didn’t feel as much pressure to impress, they’re actually more likely to get it right and get something a little bit more versatile that that recipient could spend on whatever it is they want or need.”

How can you put more thought into your gifts? Here are some tips.

Buying an impersonal gift such as a gift card doesn’t have to be a soulless experience. You can personalize them by adding a message offering a suggestion for how the recipient can use it.

“That shows the thought that you put into it, but still gives [the recipient] the freedom to spend it however they wish,” says Steffel.

You can thrown in a personal photo and message for good measure.

You can also opt for an experiential gift, such as tickets to a concert or for a trip.

“Those gifts can often be a really wonderful, socially connecting, and unique to give someone that doesn’t necessarily involve a terrible amount of mental gymnastics,” Steffel says.

Forget it, you say. I don’t care what the research says; I’m fundamentally opposed to buying gift cards. What are my options?

You can always just ask. Don’t worry; asking your boyfriend what he wants for Christmas will not cause him to question how well you really know him. He might actually be flattered that you asked.

“There’s definitely evidence that suggests that asking isn’t going to make that gift less well-liked,” says Steffel. “If anything, it’s going to make sure that you get something that is really going to be meaningful and valuable to that recipient.”

But you’re hesitant. You don’t want to ruin the element of surprise. Or maybe you’re too confident, assuming you know him better than you really do, and prefer to listen to your gut instead.

“The age-old advice is if you’re trying to imagine what somebody else might want, you’ve got to put yourself in their shoes; you’ve got to imagine what you might want if you were them, right?” says Steffel. “What we find is actually giving people that advice and encouraging them to engage in this sort of perspective-taking doesn’t help. If anything, it makes people worse in gauging their partner’s preferences.”

So go ahead and ask. Recipients usually appreciate your taking the time to learn what they want or need in a given moment, Steffel says.

When it comes to shopping for gifts, procrastination can be your friend.

This actually kind of makes sense. The earlier you start, the more time you have to overthink, whereas last-minute shoppers don’t have the luxury of time, so they’re likely to make quicker, less over-thought decisions, Steffel says.

“Sometimes it can actually help us get out of our own way,” she says. “We just go with our gut and get the thing that we know that the other person is going to like.”

If you still feel like a failure at gift-giving, Steffel has good news for you.

“Most of the time, recipients are just grateful for the gesture, period,” she says. “It doesn’t matter so much exactly what the gift is. Merely giving a gift is enough.”