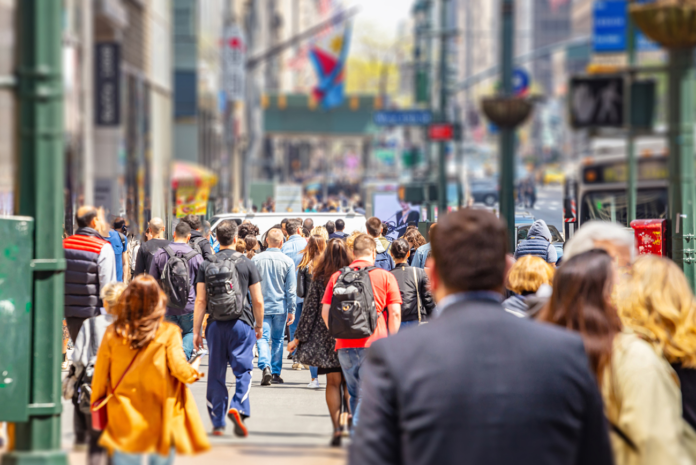 Drops in natural increase and net international migration have resulted in a gradual slowdown of the nation’s population growth this decade, according to U.S. Census Bureau population estimates released today.

On the eve of the next decade, Vintage 2019 population estimates show the nation’s growth continues to slow: the U.S. population is at 328.2 million, up 0.48% since July 2018. Growth has slowed every year since 2015, when the population increased 0.73% relative to the previous year.

Today’s release of population estimates and components of change for the nation, states and Puerto Rico illustrates changes from April 2010 through July 2019.

Growth has slowed every year since 2015, when the population increased 0.73% relative to the previous year.

Population change at the national level stems from natural increase (the difference between births and deaths) and international migration (the movement of people into and out of the United States).

So far this decade, natural increase has been the largest source of population growth for the nation.

In 2019, natural increase dropped to 957,000, marking the first time in at least four decades that it slipped below a million, continuing the trend toward fewer births and more deaths.

Population change at the national level does not necessarily reflect what is happening in states and regions. Growth is not evenly distributed across the United States, and factors contributing to population growth or decline vary across geographies.

Population gains in the South were mostly due to natural increase and domestic migration (the movement of people from one area to another within the nation).

During the same period, population declined in the Northeast by 64,000 residents, a 0.1% drop.

This population decrease was due to net domestic migration, which offset gains from net international migration and natural increase.

Over a quarter of the nation’s population lived in just three states in 2019: California, Texas and Florida.

These states were also in the top 10 in Census 2010, and all but North Carolina were among the 10 most populous in Census 2000 as well.

Not surprisingly, some of the states with the largest populations had the highest numeric growth between 2018 and 2019.

Growth in each of these states reflects the overall pattern of population growth in the Southern and Western regions of the country.

The list of states with the highest percentage growth also includes states with fewer than 5 million people that experienced significant growth relative to their population size.

Idaho, for example, ranked highest in percent growth with a 2.1% population increase, followed by Nevada, up 1.7%. Utah was fourth with an increase of 1.7%.

Domestic migration was the primary driver of growth in Idaho and Nevada. In Utah, natural increase was the leading factor.

(Sandra Leigh Johnson is a demographer in the Estimates and Projections area of the Population Division.)