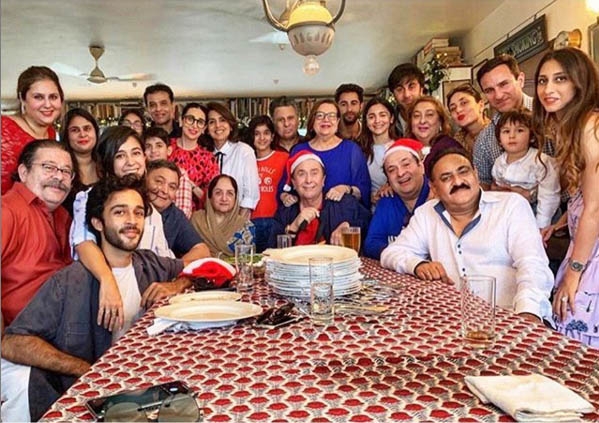 Mumbai–Actress Karisma Kapoor took to Instagram and posted a picture that captures four generations of the extended Kapoor clan in one frame.

The picture was clicked at the annual Christmas lunch of the family, and it is quite the definitive portrait of one of Bollywood’s biggest filmi clans.

“Merry Christmas from Us!” wrote Karisma, as caption with the pic.

In the picture, one can spot Karisma, and her parents Randhir Kapoor and Babita, sister Kareena who came with husband Saif Ali Khan and son Taimur, their cousin Ranbir Kapoor, who arrived with Alia Bhatt. Ranbir’s parents Rishi and Neetu Kapoor can be spotted, too. Karisma’s children Samaira and Kiaan are also in the frame, as is her cousin Armaan Jain. Neila Devi, wife Randhir and Rishi’s late uncle Shammi Kapoor is also in the picture.

The lunch was hosted by late Shashi Kapoor’s son Kunal Kapoor along with daughter Shaira and son Zahaan, who were of course also part of the family pic. (IANS)