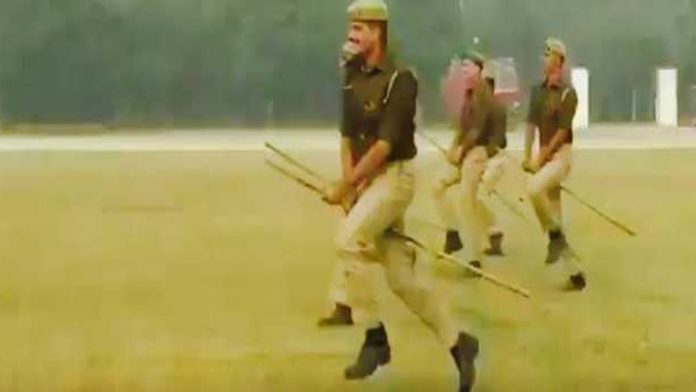 Lucknow–The Uttar Pradesh Police never fail to amuse even as it struggles hard to control crime in the state.

If the cops are not searching for lost buffaloes and dogs, they are seen indulging in theatrics.

In a latest video that has gone viral on the social media, the policemen are seen galloping like horses with baton between their legs.

The 16-second video clip is of a mock drill in the Ferozabad district and has been posted online by Samajwadi Party leader Vikas Yadav.

Inspector Ram Ikshah, meanwhile, said that the video clip was related to a mock drill held on November 8 in the police lines — a day before the Ayodhya verdict was pronounced by the Supreme Court.

“The mock drill was related to the crowd management, since we did not have horses, we symbolically conducted the exercise where the cops presumed that they were on a horseback,” he said.

It may be recalled that a few months ago, in the Sambhal district, a video had emerged in which policemen were seen shouting ‘Thain, Thain’ when the bullet got stuck in their rifle during an encounter. They probably hoped that the sound would scare away the criminals.

Interestingly, the incident got wide publicity because the cops had invited the electronic media to cover the encounter. (IANS)