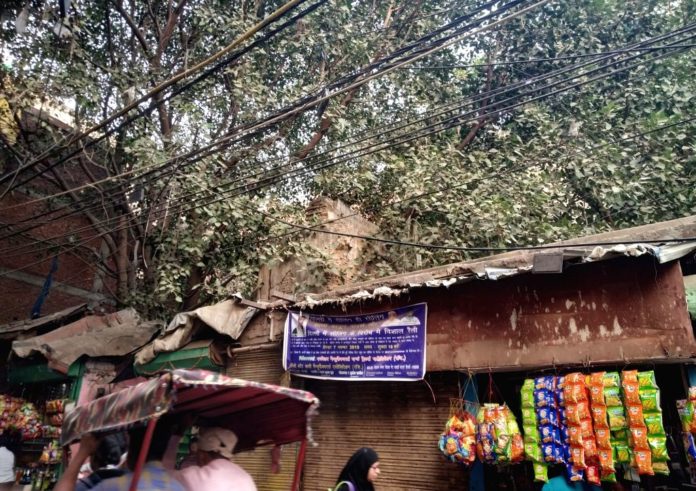 This is the neglected abode of Gandhi and Nehru family in Delhi 6. But for Mrs. Indira Gandhi, perhaps nobody from her family ever visited there. Well, this crumbling house had seen better times in the past.

Actually it was the family house of Kamala Nehru, wife of the first Prime Minister Jawaharlal Nehru and mother of the former Prime Minister Indira Gandhi.

It is in Sitaram Bazar and is known as Haksar Haveli. Actually that was the place where Pt. Jawaharlal Lal Nehru came in full-fledged “Band, Baaja, Barat” to marry Kamala Haksar on Februray 8, 1916.

When Nehru was at Harrow, London, Motilal Nehru and his wife decided to find a perfect match for Jawaharlal Nehru. They started their search and in 1912, found Kamala — a girl from a middle-class Kashmiri Brahmin family.

She was a 13-year-old, well-educated at home and knew Hindi and Urdu. They waited till 1916, when Kamala turned 17.

Alas, now, you can see only the ruins of Haksar Haveli.

The worst thing is that even people in and around Ajmeri Gate and Sita Ram Bazar in the old city area in the national capital, none would be able to tell you the exact location of Haksar Haveli.

You will be lucky if you could find any old timer who could tell you about that legendary haveli.

Jawaharlal Nehru married Kamla Nehru at the Haksar Haveli, where she used to live before tying the knot with him.

The marriage was arranged by the parents of both Jawaharlal Nehru and Kamala. Brought up in a traditional Kashmiri Brahmin family of old Delhi, Kamala was simple and reserved girl.

It is said that a very large number of Kashmiri Pandits shifted to Delhi and other places like Agra and Allahabad between 1850 to 1900 from their homeland. Among them were the Kunzrus, Rehus, Dars, Takrus, Kauls, Zutshis, Katjus and Rainas.

The elders of Kamala Nehru’s family too migrated to Delhi during those years. They built their big havelis in Sitaram Bazar. Some of the havelis of those Kashmiris are still there in Sitaram Bazar and Gali Kashmiriyan area of Delhi-6. Their descendents speak Hindustani, not Kashmiri.

They prefer local cuisines to Wazwan and other Kashmiri cuisines.

The Haksar family later sold their haveli in early 1960s. Zafar Jung, an old resident of Delhi 6 and local Congress leader, said that the Haksar family sold the house in the late 1960s to a local business man. Later, there were some dispute among the new owners of the house. Due to protracted legal battle, it has been closed ever since.

Nevertheless, it has seen salad days in the past as it used to host lot of ‘mushairas’. It is also not known whether Nehru had ever visited Haksar Haveli after his marriage.

A local Congress leader Maqsood Ahmad said that they made lot of efforts in the past so that Haksar Haveli could be converted as a heritage property. They were interested that Haksar Haveli be made as school or library. But neither local leaders nor government officials ever heeded their request.