“Blindness is common, and blind children are treated differently. To them, cricket is like a universal language, and are committed to support them,” said Samarthanam USA President Subu Kota, who last year pledged $1 million to Cricket for the Blind development globally, an initiative of Banglore, India-based Samarthanam Trust.

During one of his visits to the Samarthanam Headquarters in Bangalore, Mr. Kota had watched blind children play cricket and was inspired by the event. This inspired Mr. Kota to support and encourage Cricket for the Blind globally. He plans to bring the game to the United States in 2020. 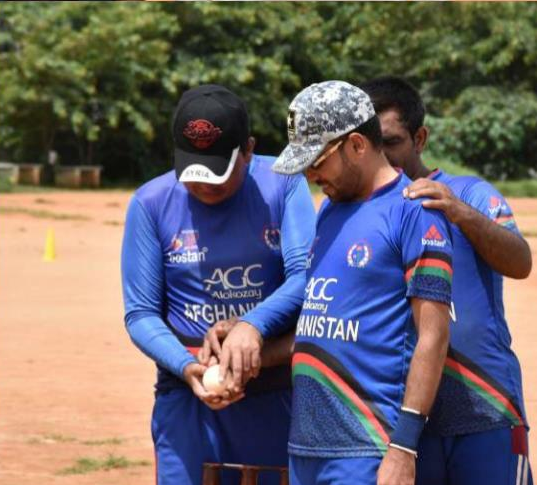 Team Afghanistan underwent three weeks of rigorous training and coaching sessions thatconcluded last month. The goal of the camp went beyond learning the rules of blind cricket and developing exceptional cricketing skills. The team was mentored by John David, General Secretary of Cricket Association for the Blind in India (CABI) in confidence building, teamwork, leadership skills, the ability to have a more positive outlook on life and strive to be winners despite the challenges they face due to their disability.

During their visit to Samarthanam in Bangalore, Mr. Kota and Samarthanam USA Executive Director Savitha Rajiv met with Team Afghanistan to talk about their experience at the coaching camp.

When asked if their blindness was by birth, they shared that they all lost sight due to bomb blasts in their country. In fact, a significant population in Afghanistan are visually impaired or have some other form of physical disability due to the bomb blasts. Many of them started playing cricket after they became visually impaired, as a way to bond and focus on something fun away from the political unrest in the country.

Samim Eshanullah, the President of Cricket Association for the Blind in Afghanistan talked about the challenges the blind cricket team faces. Lack of sponsorship opportunities or recognition for blind cricket has made it almost impossible to avail any training and workshops for the players. There is no disability friendly infrastructure and sports gear available in Afghanistan. And the constant terrorist activity and political instability add to the long list of challenges these young men face.

Thanks to CABI and Samarthanam USA, Eshanullah brought with him three promising players including Sardar Wali Qazi Khil, Zargai Bazmal and Malikzai to train and take the lessons with them to impart on their peers back home in Afghanistan.

Samarthanam USA plans to sponsor another four blind cricketers from Afghanistan to come train in Bangalore and to eventually build a cricket team that can play against World cup champions, India and other Blind cricket teams from Pakistan, Sri Lanka and the UK.

Samarthanam Trust for the Disabled is a non-profit organization founded in 1997 with a mission to build an inclusive society, facilitating opportunities to the disabled and the underserved.

Samarthanam’s seven intervention including education, skilling, sports, environment, arts and culture, child nutrition and rehabilitation are directed towards the empowerment of persons with disabilities.