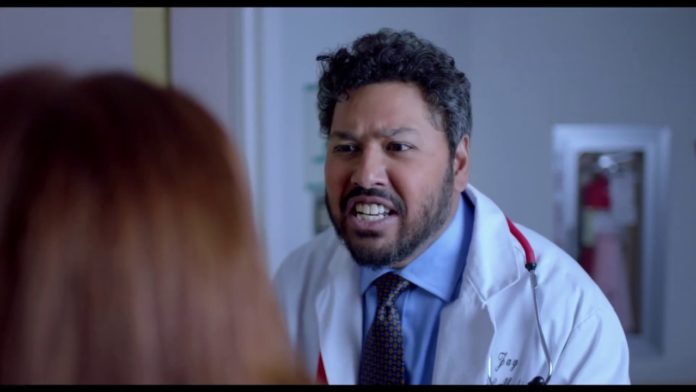 ‘Remember Amnesia’ is an Indie film in English, written and directed by Dr Ravi Godse. Despite having suspense and romance in equal measure, it lags way lower in the rung as a rom-com.

The title, ‘Remember Amnesia’, an oxymoron is intriguing. The film begins on a promising note with an interesting and sombre background score introducing us to Jay (Dileep Rao), a doctor of Indian origin settled in America.

Because of his obnoxious behaviour towards his colleagues, Jay is forced to visit India. Thence the plot, packed with stereotypical characters, verbose exposition and some witty dialogues, rolls out with clichés that make you repel.

Narrated in a linear manner, in India en route to his uncle’s place, Jay is robbed of his belongings and an accident makes him lose his memory. How he is nursed back to his senses with the help of Nina (Shruti Marathe), his caring doctor, forms the crux of this tale.

Here, in a predictable story with one easily anticipated development after another, everything comes alive because the actors live the moment. Dileep Rao, with his typical American traits as Dr. Jay, is charming and convincing. He is a natural delivering his dialogues that are punched with dark or sarcastic humour.

Shruti Marathe as Dr. Jay’s love interest, is equally effortless. Together, their on-screen chemistry is palpable.

Mahesh Manjrekar, despite having a strong personality in a staid role as Dr. Sharma, does not add any nuance to his character, and Mohan Agashe in an absolutely miniscule role is wasted.

Tovah Feldshuh as Jay’s Boss Dr. Paula Smith, Curtiss Cook as Jay’s colleague and Rondell Sheridan as the security guard have their moments of on-screen glory.

Vijay Patkar and Anand Kale as bungling opportunists, besides Pran and Samir in hackneyed, nonsensical comedic roles, are eye-sores. Honestly, they weigh the film down.

Mounted with a moderate budget, the film has decent production and cinematic values. The visuals, background score and the editing are of fine quality.

At the end of the film, the director’s unwarranted public service message appears forced and amusing. It’s a kind of big brother giving you a sermon.

Overall, while the plot smoothly delves into the workings of the hospital in the US and India, the director seems stuck in a time warp, that shows India in a poor light.