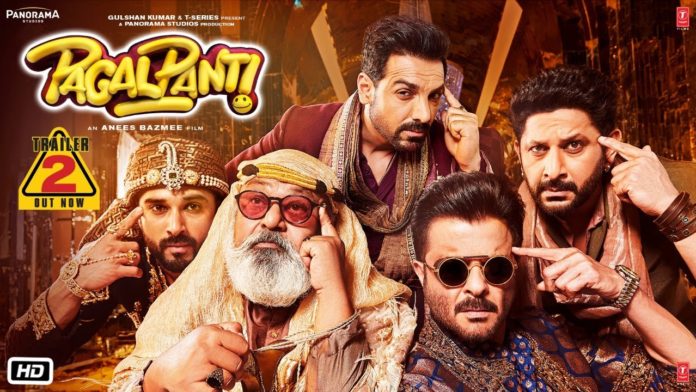 Okay, you’re not supposed to look for a story. They don’t want you to look for logic either (“zaroori nahi hai ki har cheez ka matlab ho,” declares John Abraham in the climax — is that supposed to be the film’s message?).

In the Anees Bazmee dictionary of slapstick, the words sense and sensibility failed to find space a long time ago. Your are supposed to go in suspending all disbelief quite wilfully, and lap up whatever is tossed your way in the name of entertainment.

There’s the problem, actually. If only ‘Pagalpanti’ had ample entertainment, if only the show was ‘Pagal’ enough. An Anees Bazmee film is supposed to make you laugh, never mind its IQ. The trouble with “Pagalpanti” is, as the quota of madness unfolds incoherently on the screen, the sheer lack of genuinely funny gags becomes all too obvious.

Setting up a functional script, Bazmee and his co-writers (Rajiv Kaul and Praful Parekh) have assorted every formula they could think of. The combo is familiar: Three good-for-nothing guys as the heroes, a couple of great actors as the antiheroes, three pretty ladies as the heroines, whose primary job is to, well, look pretty.

Thrown in are some high-voltage action and car chases, lots of naaach-gaana and a cool foreign locale to complete the picture. For added effect, Bazmee’s fetish with animal jokes continues (this time there’s a gag involving African lions). It’s all there, duly packed and sealed in the standard formula box of Bollywood, and guaranteed to keep the opening weekend buzz intact.

Bazmee this time has done something that he has never done before. He has stuffed in an undercurrent of patriotism in the final act that seems wholly out of place in this film.

John Abraham, Arshad Warsi and Pulkit Samrat – the three heroes — are pictured as a moronic bunch. They are Raj, Junky and Chandu respectively, who end up causing serious damages to a couple of gangsters, Raja Bhai (Saurabh Shukla) and his brother-in-law WiFi Bhai (Anil Kapoor). The gangsters won’t spare them now, unless they agree to work for them.

Twists in the tale happen because Raj is a jinxed person. His bad luck rubs off on whoever comes in his contact, which includes the gangster squad as well as a fugitive businessman named Niraj Modi (Nirav Modi, anyone?), played by Inaamulhaq, who find their lives spiralling out of control once the trio enter their lives.

With a plot that is neither coherent nor consistent, Bazmee and his creative team have tried positioning “Pagalpanti” as an action comedy. Technically, this is a glossy film — like most commercial Bollywood fare these days. Sunil Patel’s camerawork is effective, though Prashant Singh Rathore’s editing could have been tighter. The runtime needed to be shorter.

The film boasts of four composers -– Sajid-Wajid, Yo Yo Honey Singh, Tanishk Bagchi and Nayeem-Shabir -– and that is a high count if you consider that the only tune you take back home is one that Laxmikant-Pyarelal created three decades back for Sridevi in “Chaalbaaz” (“Tera beemar mera dil”).

The casting looks predictable, though the actors still remain the best part of the film.

The funniest act here comes from Arshad Warsi. Given some of the best punchlines, Arshad’s act is a hoot. It is credible the way he reinvents the funny sidekick every time.

John Abraham looks too dapper to be the out-and-out bumbler he is cast as. Pulkit Samrat carries some of his “Fukrey” airs into creating Chandu. Saurabh Shukla is functional as the gang lord.

The film’s leading ladies stick to the glamour cliches of Bollywood -– which is unimaginative actually, at a time when the entire idiom that defines the Bollywood heroine is changing.