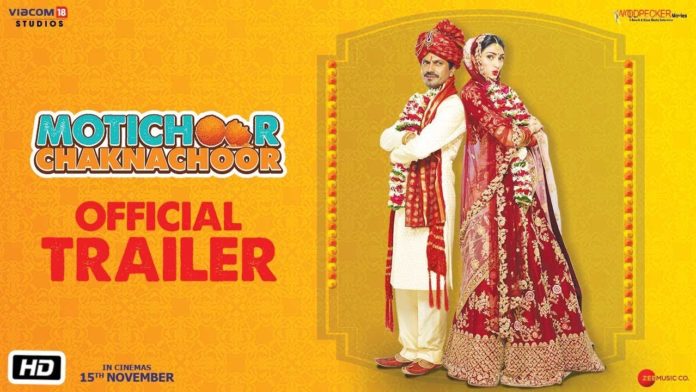 The biggest killjoy for a joke is a situation where you have figured out its punchline long before it ends. “Motichoor Chaknachoor” suffers from that problem. It doesn’t take you more than 10 minutes to figure out where the film is headed, which is sad because the film looked like a winning concept on paper at least.

That bit is ironic. “Motichoor Chaknachoor” held the promise of being quirky fare, right from the unconventional casting of Nawazuddin Siddiqui opposite Athiya Shetty. As the duo tries to light up the stray comic sparks, you realise the awful truth: Unimaginative writing affects comedy more than any other genre, and the ones that suffer squarely are the actors on screen.

If you discount his trademark intense screen persona, Nawazuddin has often revelled in deadpan humour. The actor invokes that quality here for most parts while bringing alive Pushpinder Tyagi, a middle-aged bachelor who works as an accountant in Dubai and who arrives in hometown Bhopal as the film starts, in search of a bride. Pushpinder’s mother (Vibha Chibber) hopes to make big moolah by way of dowry in the process.

Meanwhile, girl next door, Anita (Athiya Shetty), has been rejecting a long line of eligible suitors because they don’t fit the one condition that matters to her: She wants her groom to be foreign-settled.

Pushpinder and Anita’s story isn’t really about childhood romance or love at first sight. Rather, the trigger point is Anita’s aunt (Karuna Pandey), who tells the girl her the hunt for a suitable groom ought to end with the Dubai-settled Pushpinder, and — so what if he is much older — the girl sees logic in the idea. She agrees to go for what she feels would be a dream wedding – a ticket to permanently settling in Dubai.

The film takes an entire half to set up that premise, before taking another entire hour to unfold where Pushpinder and Anita’s story could be headed. The lazy pace is the film’s bane, you realise, as the intended rom-com spirit gives way to boredom.

Director Debamitra Biswal and co-writer Bhupendra Singh “Meghvrat” struggle to create any memorable characters, too. Normally, Bollywood’s smalltown films have lately thrived on two factors. The first is these films often use the peculiarities of smalltown India to set up absorbing moods and situations in the narrative -especially pertaining to humour. The second is smalltowns provide ceaseless ideas for interesting characters.

“Motichoor Chaknachoor” somehow struggles on both fronts, you realise, as sheer mediocrity takes over the narrative.

The film also fails to capitalise on the prospective odd couple chemistry you had hoped to see, given the pairing of Nawazuddin and Athiya. For a rom-com that can be quite a downer.

Yet, none of these flaws can match the almost shoddy (and wholly demeaning) deal that the script reserves for Anita. For the sake of a happy home, she must give up on her ambition, in the way the heroine was expected to do in Hindi commercial films all those decades ago.

If writer-director Biswal’s idea was trying to create satire with that idea, it somehow fails to come through. That’s actually where this Motichoor goes Chaknachoor.

There’s not much to recommend here, except a few sporadic laughs caught in a time warp — which is sad in a way, for one went in hoping for a cracker of an entertainer. Watch the film for the performances if you must. Nawazuddin Siddiqui and Athiya Shetty, in particular, are likeable for the sheer effortlessness with which they get into their half-baked characters, as is the film’s prop cast – many of who are unknown faces to even regular Bollywood buffs.