BOSTON–Prof. Kuzhikkalail M. Abraham is a pioneer in the development of rechargeable lithium and lithium ion batteries. The work he and his research team carried out in late 1970s and early 1980s contributed to the demonstration of one of the first practical rechargeable lithium battery and helped transform Li-ion batteries from a laboratory curiosity to a technology indispensable for everyday life today. 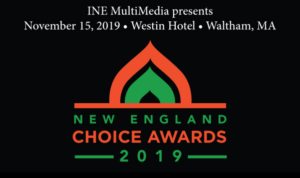 He is also inventor of the ultrahigh energy density non-aqueous lithium-air battery which is under development in many laboratories around the world and has been subject of thousands of journal publications and many symposia in lithium battery meetings world-wide.

On Nov. 15, 2019, he will be honored with the Academic Excellence Award at New England Choice Award gala at Westin Hotel in Waltham, MA. Here is a brief Q/A with Prof: Abraham:

INDIA New England News: What do you like most about your work?

Kuzhikkalail M. Abraham: I work in the field of electrochemical energy conversion and storage which in lay people’s language means battery science, and specifically lithium battery science and engineering.

When I started my career forty three years ago, rechargeable lithium battery was a mere laboratory curiosity. Fast forward four decades, they have become household items which we cannot live without as they power all the mobile devices essential for everyday life. I have the extreme satisfaction that I have been able to contribute to the practical realization of this very important technology.

I also have the satisfaction of training and educating young colleagues and students in the lithium battery field, and they are now carrying on the work and contributing to the future growth of this important technical field.

INE: Who Inspired you the most and why?

KMA: I grew up in a modest middle class family in a village in Kerala as the oldest of nine children. College education was not something most young people in that part of the country thought about. Two close family members inspired me in different ways to become successful. My maternal grandfather with whom I spent a lot of my early life encouraged me to study hard and achieve the highest education I could.

Another person who was very important in my early life was my uncle (father’s younger brother) who provided financial assistance for me to attend college. I am pleased that I have been largely able to live up to their expectations.

INE: What has been the secret of your success?

KMA: I have a couple of simple principles I use in my everyday life.

These principles have allowed me to sustain a relatively long work life with enjoyment and with technical and financial success.

INE:  One advice you will give to the person you love?

KMA: My advice to the person I love would be the same principles which helped me to become successful – aim high, work hard, always do the best job possible in whatever he or she is involved with, do not stray from the work at hand, focus and complete it.

INE:  How do you look at failure?

KMA: I do not consider a career setback or failure as the end of everything. Rather, I view failure as an opportunity to learn from it, remedy the mistakes and move forward to reach even greater heights in the future. In scientific research sometimes failures or mistakes can be the harbinger to inventions.

The important thing is to recognize the mistake and figure out what has occurred. This happened to me in an experiment my colleague and I were conducting. We recognized that the unexpected results were due to an error in the experimental procedure, but characterizing what had happened led to the invention of the Lithium-air battery, the highest energy density battery presently known.

KMA: “If you cannot explain something in simple terms, you do not know it”. Prof. Richard Feynman.