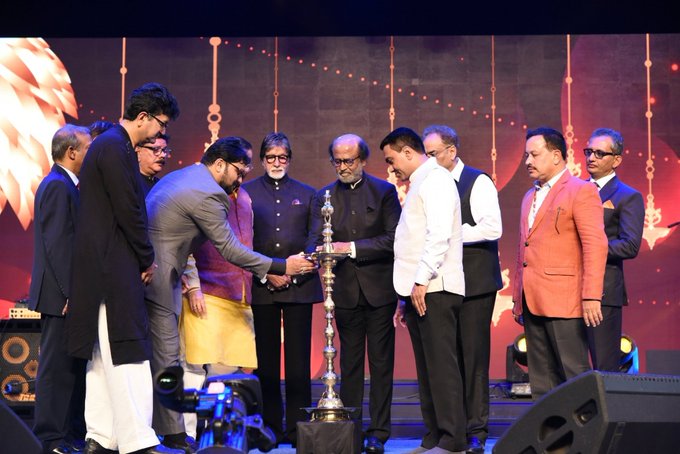 Panaji–The 50th edition of the IFFI got off the to an edgy start in Goa on Wednesday, with the inaugural ceremony, which was attended by the twin powerhouses of Indian cinema Amitabh Bachchan and Rajinikanth, marred by public heckling of Union Minister for Information and Broadcasting Prakash Javadekar, over his role in the ongoing water dispute Goa and Karnataka.

Political party workers and activists were also arrested, after they protested with ‘Go Back Javadekar’ placards outside the festival screening venue in the state capital.

At the inaugural ceremony, Javadekar described cinema as India’s “soft power” while announcing the setting up of a single window clearance system for processing of permissions for film shoots.

“India has such scenic locations, sites, but for shoots, one has to take 15-20 permissions. We are starting a single window system for (permission) for shootings. Goa, Leh-Ladakh and Andaman and Nicobar will also benefit,” Javadekar said during the inaugural session.

The inaugural session, compèred by well known director Karan Johar, began with a tribute to Goa’s stalwart politician the late Manohar Parrikar who hosted the first IFFI in Goa.

Apart from Rajinikanth who was presented with the Icon of the Golden Jubilee award and the felicitation of Amitabh Bachchan, French actress Isabelle Huppert was conferred the festival’s Lifetime Achievement award.

“Feel honoured and grateful for being the recipient of the extraordinary award,” Huppert said, on acceptance of the honour.

“I am extremely happy to receive the Icon of the Golden Jubilee. I dedicate this to all my directors, producers and technicians who have been with me and above all my fans,” Rajinikanth said on receiving the award.

Maria Lemesheva, head of the delegation from Russia, which is the country under focus in this edition of the festival, invited Indian film makers to shoot in Russia and work on co-productions, saying the Russian government had recently announced a 40 per cent rebate on foreign films shot there.

“In the last few years, the Russian film industry is rising and films of all genres are being made and getting access to different festivals across the world,” Lemesheva said.

Amitabh Bachchan who was specially felicitated on the occasion said that he owes his success to his fans. “This is a debt on my head of your love and affection. I would not be able to repay the debt and I would not want to, because I would like to keep it forever,” he said.

To commemorate the occasion a special postage dedicated to the completion of 50 editions of the festival was also released on Wednesday.

Over 9,000 delegates have already registered for the event, which is scheduled to screen over 200 films from 76 countries, which includes 26 feature films and 15 non-feature films, which will be screened as part of the Indian Panorama section.(IANS)