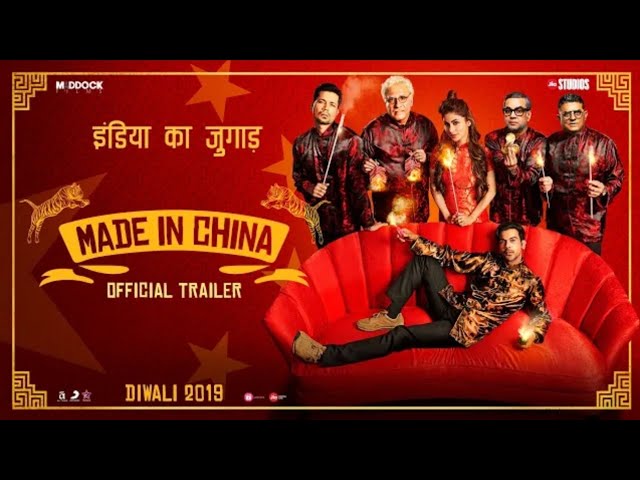 “Made In China” is symptomatic of what’s often happening in Bollywood right now. They have a concept driven by content that’s high on blending entertainment and message, and the idea is original, too. Yet the effort gets lost in execution, hampered by unsure storytelling.

Director Mikhil Musale’s Bollywood puts together two very different themes to set up the story. The first is sex and the Indian mindset – a domain that commercial Hindi filmmakers have been warily stepping into only in recent times, with films such as “Vicky Donor”, Shubh Mangal Saavdhan” and “Khandaani Shafakhana”. The second theme is good old entrepreneurship, and how nothing defines success in a business effort as a clever hardsell pitch. This is an area Bollywood has tapped into abundantly in the past, with films such as “Gurua, “Rocket Singh: Salesman Of The Year”, “Band Baajaa Baaraat” and “Badmaash Company”.

Clubbing the unrelated themes of sex and entrepreneurship could have been a sureshot USP if the writing was sharper, especially in the first half. The film wastes too much time before the post-interval hour finally salvages audience interest in what’s going on.

Based on Parinda Joshi’s bestseller of the same name, “Made In China” presents Rajkummar Rao as Raghuveer, a Gujarati entrepreneur struggling to find his feet, although his father (Manoj Joshi) and elder brother (Sumit Vyas) are successful businessmen. Faced with consecutive setbacks, Raghu’s luck will turn one day after a chance encounter with a big businessman, Tanmay Shah (Paresh Rawal).

The meeting, as well as certain twists that follow, leads to a lucrative brainwave. Raghu chucks all orthodox notions he has grown up with when he realises, in a country starved of sex, there is serious money to be made in the business of aphrodisiacs. But first, he must rope in an honest sexologist as partner. He finds one in Dr. Vardhi (Boman Irani). Soon, Raghu, Vardhi and their small team are selling Magic Soup, billed as top quality Chinese aphrodisiac with a secret recipe.

For a token villain, there is the greedy rich guy (Gajraj Rao), who ends up in a spot of disadvantage as Raghu thrives. The character doesn’t get a proper closure.

“Made In India” is enjoyable in parts, and most of these parts begin rolling only after half the film has tested your patience showing precious nothing. Too much time is spent narrating the hero’s marital life (Mouni Roy is Raghu’s wife) and his situation at home. Raghu’s initial consecutive failures are amusing but they prevent us from getting into the actual story for a while.

The post-interval part, where the plot really moves, is complemented by a well-penned climax that gives a credible ending to the themes of sex talk as well as entrepreneurship, binding them in a cohesive whole. The importance of ridding sex of the taboo factor is put across without over-the-top fuss, and it fuses seamlessly with the hilarious reality about Magic Soup.

“Made In China” benefits from enjoyable performances of its two key players, Rajkummar Rao and Boman Irani. While Rajkummar is at home playing the guy next door with big dreams, Boman’s Dr Vardhi is yet another understated comic addition to the actor’s versatile repertoire.

In comparisons, the film’s lead actresses, Mouni Roy (as Raghua¿s wife) and Amyra Dastur (as a member of Raghu’s Magic Soup team) get characters that are not fully fleshed out. One would have also expected Paresh Rawal’s cameo appearance get more space in the narrative.

Inadvertently, “Made In China” lives up to its title, delivering a product that is faulty in parts and works in fits and starts. A portion of Magic Soup would perhaps have pepped up things. (IANS)