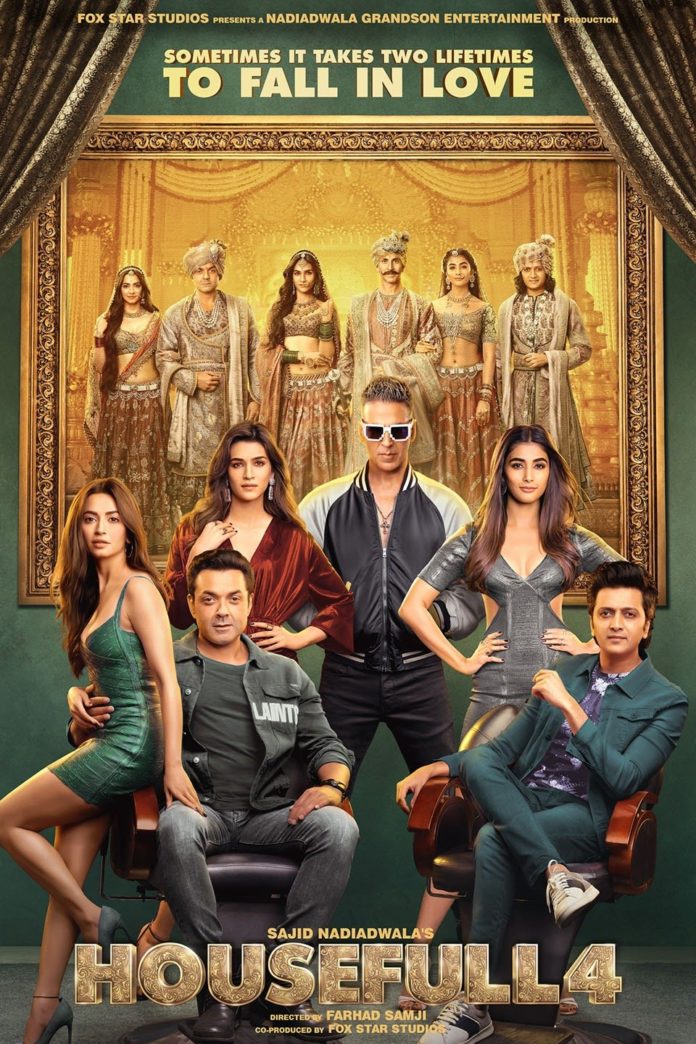 Give them some points for consistency. Maintaining the same low IQ over four films – and crafting it into a moneymaking franchise – is no small deal. By now, the makers of these “Housefull” films have chucked all notions of sensible storytelling and intelligent humour. Why bother? What matters is setting off a big bang hype before release, and the box-office math solves itself.

“Housefull 4” tries giving Bollywood’s much-flogged ‘punarjanam’ (reincarnation) formula a spoofy spin. The idea would seem quirky, to begin with. Unlike standard Bollywood reincarnation dramas, where the hero and heroine (and villain at most) get rebirth after an untimely death, “Housefull 4” merrily puts its entire cast on the Punarjanam bandwagon. Every single character is reborn.

Daft as the premise is, it sounds hilarious. The problem is, much like the “Housefull” films before, this sequel, too, doesn’t reveal any ambition of being remarkable in the quality of entertainment it fashions out of that premise.

These films have never really been about the concept – they are always about the commerce. In that sense, Akshay Kumar and company have stormed into the ‘plexes with the one-point agenda of emerging the biggest Diwali grosser this year (who knows, perhaps even the biggest Diwali ever). Making a good comedy can be secondary, there’s big money to be made.

Money talk becomes important within the scope of a review in the case of “Housefull 4” because that is the sole reason this film was made. One does understand, in the case of mainstream films as this, the definition of ‘good film’ or ‘bad film’ directly corresponds to whether box-office revenues spell big bucks or small change. In that context, “Housefull 4” is smartly budgeted, advertised and distributed. It is a neat example of how big-budget Bollywood filmmaking in the corporate era has mastered the low-risk game.

Onto cinematic details about the film, there is really not much to say. Every once in a while Akshay Kumar seems to feel the urge to take a break from his newfound nationalism duty on screen and return to roots – which, in his case, has lately been about churning out extremely bloated, insanely nonsensical “Housefull” films. The formula is duly spruced up every time with a new slapstick gimmick and a new prop cast of heroines to add to the ditsy glitz.

The gimmick this time pertains to reincarnation. A script credited to Sara Bodinar and Sajid Nadiadwala swings between the imaginary Sitamgarh kingdom of 1419 and modernday London as the film opens. In the royal palace of Sitamgarh 600 years ago, three pairs of lovers are killed following an evil conspiracy against the king. Six centuries years later, all six protagonists are born again in London and once again end up as lovers.

There is a catch. Fate has mixed up the couples. Each person is with a wrong partner. When a twist in the tale brings them from London to Sitamgarh, it is time for discoveries of past-life romances. A stupid game of ‘spot your previous life’s lover’ begins to unravel.

The film is trying to work as a spoof, you realise, as everything from “Game Of Thrones” to “Ghajini” to “Bahubali” to “Karan Arjun” gets a wink. The quality of Bollywood lyrics and the Ramsay brand of B-horror (executed through a half-baked Nawazuddin Siddiqui cameo), aren’t spared, too, even as the quota of transgender jokes, gay jokes and a tiresome birdsh*t gag plays themselves out.

“Housefull 4” credits six creative brains as screenplay writers (one of whom, incidentally, is Tushar Hiranandani, the debutant director of “Saand Ki Aankh”). Just why would you need half a dozen collaborators to set up a comedy that hardly exists – plot-wise or in terms of humour quotient – is beyond one’s guess.

The film really runs on an auto-pilot trip, with random and unintelligent gags splattered all over the screenplay. Most of these are too repetitive to seem funny – even if you are in a magnanimous festive mood to ‘leave your brains out and go for a watch’, as the much-abused Bollywood hardsell pitch goes.

Akshay Kumar returns to rehash a familiar “Housefull” bag of tricks, in dual roles of a sly prince with a bald pate complex, and a bumbling modernday hairdresser with a short-term memory loss syndrome triggered by noise. Farhad Samji, who directs and co-screenplays this film, was obviously working at creating a package meant to flaunt his superstar leading man’s comic timing. The execution of the film wholly seems focussed on setting up a vintage Akshay Kumar slapstick.

The rest of the cast divides into two categories. The first is the band of regulars of the franchise, who return with Akshay. Riteish Deshmukh, Chunky Pandey, Ranjeet and Johnny Lever look jaded repeating the same jokes they have already pulled off in previous “Housefull” flicks.

The second lot comprises the new additions – mainly, the heroines. Cast as rajkumaris in their past lives and modern girls in their presentday avatars, Kriti Sanon, Kriti Kharbanda and Pooja Hegde are basically required to do what a highly interchangeable female cast in such films do – look pretty. There’s Rana Daggubati and Sharad Kelkar as the villainous duo this time. They look like a couple of baddies straight out of some bad eighties film.

“Housefull 4” is more like a haggard circus than a film. It parades an assembly of overdone tricks inside its gaudy, star-studded canopy.(IANS)