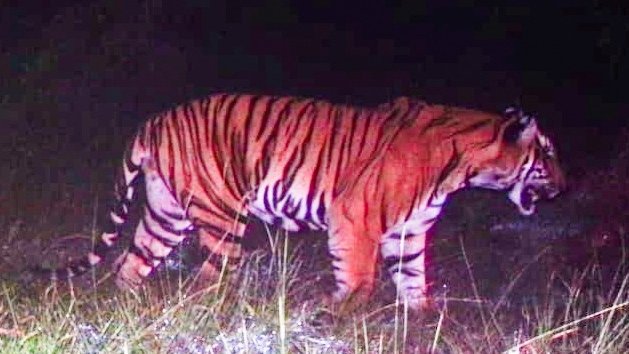 Bengaluru– The captured man-eating tiger from Karnataka’s Bandipur reserve forest is healthy and under observation at the wildlife rescue and rehabilitation centre in Mysuru, a wildlife official said on Monday.

“The middle-aged tiger is in a healthy condition and under observation at the Chamundi wildlife rescue and rehab centre in our zoo at Koorgalli,” Chamarajendra Zoological Gardens Executive Director Ajit Kulkarni told IANS on phone.

In a massive hunting operation lasting 5 days, the killer tiger was traced and captured on Sunday in the forest with the help of Soliga tribals, who are experts in hunting wild animals on foot.

The tiger remained elusive since October 9 after claiming farmer Shivappa as its second victim a day earlier and a month after mauling Shivamadaiah, another farmer to death inside the forest. It had also killed and devoured 14 cattle during the last two months.

“We are giving time for the tiger to settle down in a holding room. So far it is fine. We will execute a thorough veterinary medical check up once it settles down,” said Kulkarni.

Animals are not handled immediately, and it is only after they settle down, their weight, height and other indicators are measured, he said, adding that no tests were done so far.

“The settling time varies from animal to animal as some take 4-5 days to become normal,” Kulkarni added.

The tiger is fed beef once a day and offered water. No medicines are given as it has no internal or external injuries though it was hit twice with a dart to traquilise it for capturing.

The Bandipur forest is spread over 872km on the border with Tamil Nadu and in the southern state’s Chamarajanagar district, about 220km southwest of Bengaluru.

Meanwhile, Bandipur forest Director T. Balachandra told IANS that the Soligas were given some money for helping the forest guards and the vets in tracing and capturing the killer tiger.

“We gave some monetary reward to the Soligas,” said Balachandra but did not quantify the amount given to them as a gesture.

The search operation was conducted as per the guidelines of the National Tiger Conservation Authority (NTCA).(IANS)