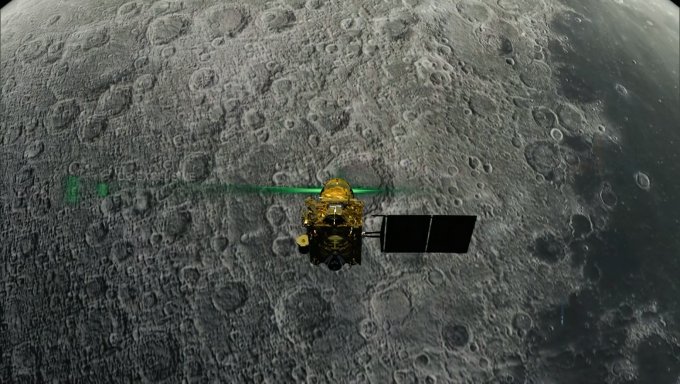 Chennai–Did India’s first moon lander Vikram crash on to the lunar surface resulting in the sudden snapping of the communication link with the Chandrayaan-2 Orbiter?

The officials of Indian Space Research Organisation (ISRO) agree to the possibility of such an event as the lander had tumbled and regained its posture minutes before it was supposed to set its legs on the lunar surface.

The lander was coming down smoothly, making the ISRO officials applaud at regular intervals with their faces beaming with pride, as they were glued to their computer monitors.

The lander successfully completed its rough braking phase with its descent speed going down well.

On the telemetry screen at the ISRO Telemetry, Tracking and Command Network (ISTRAC) centre in Bengaluru, it was noticed that Vikram had slightly veered away from its plotted path but had immediately come back.

Soon after, Vikram again shifted from its planned path and then the communication link got snapped.

Announcing the snapping of communication links, Indian Space Research Organisation (ISRO) Chairman K. Sivan said the performance of the lander was as per the plan till it was 2.1 km away from its designated landing spot on the Moon’s South Pole.

The communication link got snapped after that. The data is being analysed, he added.

The lander could communicate with the orbiter and also with the Indian Deep Space Network (IDSN) in Byalu near Bengaluru.

So what could have gone wrong at the last moment?

At an altitude of about 5 km from the lunar surface, the lander slightly veered off its plotted path and came back to its original path immediately.

“Just before the loss of communication link, the lander tumbled but recovered immediately. And after that the communication signals snapped. That means the lander in its trajectory lost its position,” an ISRO official told IANS on the condition of anonymity.

“As per the landing sequence, the liquid apogee engine would be firing. When the lander is in an upside down position, if the engine is on fire then its descent will be faster,” he added.

To a question as to why the Vikram had tumbled and was it due to the uneven functioning of its throttleable engines, the officials did not rule out the possibility.

“Whether the throttleable engines did not work or whether there was an uneven distribution of power has to be studied. The failure analysis will focus on what went wrong at the last moment,” he added.

Speaking to IANS on the condition of anonymity, another ISRO official said: “The lander could have lost its control when its thrusters were switched off during its descent and crash-landed, snapping the communication links. The vehicle will lose its stability if the thrusters do not work in unison.”

According to ISRO officials, Prime Minister Narendra Modi’s speech and his attitude was really inspiring.

“He came back to the ISRO centre at 8 a.m. today (Saturday) and shook hands with many officials. He could have gone back without returning to our centre,” the official said.

Meanwhile, all is not lost as far as the Rs 978 crore Chandrayaan-2 mission is concerned.

“Only 5 per cent of the mission has been lost — Vikram the lander and Pragyan the rover — while the remaining 95 per cent — that is the Chandrayaan-2 orbiter — is orbiting the moon successfully,” an ISRO official, who did not wish to be named, told IANS.

With a mission life of one year, the orbiter can take several pictures of the moon and send it to the ISRO.

The orbiter can also take pictures of the lander to know its status, he added.

After five earth-bound orbit raising activities, Chandrayaan-2 was inserted into lunar orbit. On September 2, Vikram separated from the orbiter. (IANS)