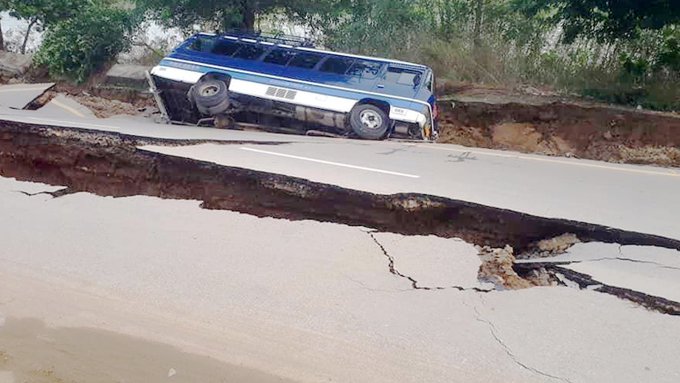 Islamabad– A strong earthquake measuring 5.8 on the Richter scale jolted Pakistan on Tuesday, killing at least 19 people and injuring over 300, officials said. Aftershocks are likely and local authorities have been asked to take necessary precautions to avoid any more loss of life.

The quake was so strong that it could be felt even in the northern parts of India, including capital New Delhi.

The tremors lasted 8-10 seconds, but were felt strongly across Pakistan, including major cities of Islamabad, Peshawar, Rawalpindi and Lahore, Dawn News reported.

According to United States Geological Survey , the quake struck after 4 p.m. (Pakistan time), which sent the people racing out of buildings and offices in cities across the country.

A report mentioned that the epicentre of the earthquake was in Mirpur, near PoK-Punjab province border. The quake’s intensity was felt maximum in Mirpur (PoK), an official said, adding 19 people, including three children, have been killed in the area.

Mirpur Divisional Commissioner Chaudhry Muhammad Tayyab said of the over 300 injured, the condition of 35 is critical.

Meanwhile, a statement issued by the National Disaster Management Authority warned that there were likely chances of aftershocks in the next 24 hours, requesting departments concerned to take all necessary precautionary measures.

“In view of 5.8 magnitude with 10 kilometre depth and 80 km south east of Rawalpindi at Epicentre Jhelum earthquake on 24 September 2019, there are likely chances of aftershocks in the next 24 hours. Your are also requested to share details of losses and damages if any.” (IANS)