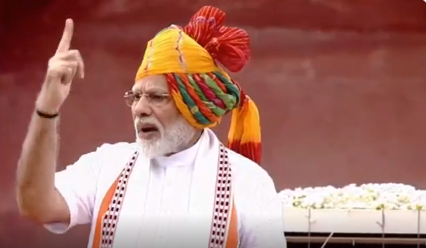 New Delhi–Prime MInister Narendra Modi on Thursday hailed his government’s decision to revoke Article 370 of the Constitution that gave special status to Jammu and Kashmir, saying that it was a step towards realising the dream of Sardar Vallabhbhai Patel.

Addressing the nation from the ramparts of the Red Fort on the 73rd Independence Day, Modi said: “The government is yet to complete 10 weeks and we have provided speed to the development programme. We did not wait even a day to start our work.

“In this short span of time, we have taken important steps in every sector. Article 370 and 35A being revoked from Jammu and Kashmir is a step towards realising the dream of Sardar Patel.”

He said the work which was pending for the last 70 years was accomplished in less than 70 days under his government.

The Prime Minister said everyone wanted Article 370 to be scrapped, but they were waiting for the appropriate time.

He added that his government had taken important steps to end triple talaq, for the welfare of farmers and traders and also to make the medical sector even more people friendly.

He also paid tribute to the those who laid their lives for the independence of the nation.