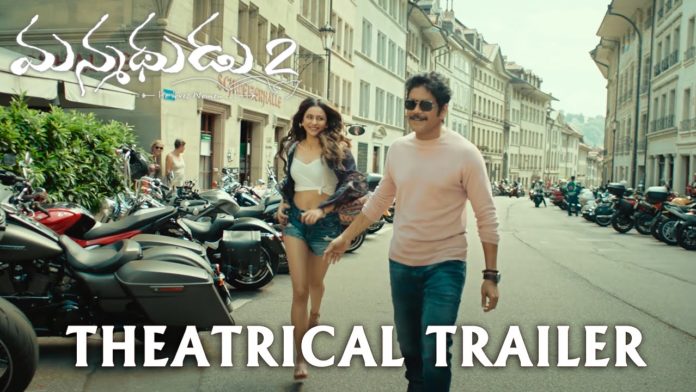 At 60, Nagarjuna preserves a boyish charm that renders itself with great effectiveness in this winsome, fluffy, bouncy, bubbly and bright rom-com.

Adapted from a 2006 French film , “Prete-moi Ta Main”(which means ‘Rent A Wife’), the Telugu adaptation ferrets out the meaty, mirthful, relevant portions from the original and adds bits of its own, which don’t always work.

What works is the undeniable chemistry between Nag and his very pretty and confident co-star.

Rakul Preet Singh encores(excuse the French, but that’s the flavour) her role from her recent Hindi hit “De De Pyar De”. She is the 20-something feisty, fearless, flirtatious femme fatale whom the 40-something virgin Nag(the joke is, he hits on everything in skirts but his family is oblivious) hires to appease his bahu-fixated mother (the lovely Lakshmi; no longer ‘Joyous Julie’ but still a joy to behold) and his 3 sisters(there were 4 sisters in the original FrenchA film).

The entire brood of Telugu-speaking bride-seekers live in a scenic Portuguese town called Cassandra.The film looks and feels organically beautiful. We even get a brief animation history of the Indian connect with the exotic location. All this, plus some tediously unfunny ‘comic’ scenes that come later, could have been avoided.

Providentially these superfluous elements in the script do not take away from the heart of the plot , which subsumes Sam(nickname for Sammba)’s childlike devotion to his mom and sisters as opposed to his secret lust life, which only his bestfriend and PA Kishore(played by Vannela Kishore, the eternal best friend of Telugu cinema) is aware of.

Nagarjuna pulls off the child-man act with remarkable restrain. He is the mollycoddled mama’s boy around his mother and sister and the lustful Lothario in a series of encounters with sexy women. In fact this is the sexiest film of Nag’s career. The libidinous encounters include a hilarious sequence where Nag’s best friend runs to a drugstore for condoms when his master is in the mood with a one-night stand. Nag pulls off the sexy-at-60 stint with aplomb.

Oh, I forgot. This guy also suffers from OCD,and there is a brilliant encounter with Rakul where she spills spaghetti on the cushion.

What doesn’t work are the loud attempts at broad satire, like the pre-planned non-happening wedding where Nag acts like a jilted groom so loudly that anyone can see he is faking it. Or that really stupid sequence where the entire family inhales weed. And the less said about Rakul’s fake lesbian encounter with one of Nag’s screen sisters, the better.

All the slurs in the screenplay are swept aside once Nag and Rakul get on the screen to romance to Chetan Bhardwaj’s lovely songs. The twosome’s toothsome togetherness grows with compelling cuteness. The relationship is fuelled and nurtured by a deep understanding of what makes two seemingly incompatible people care for each other in spite of all odds.

Decades ago, the great BR Chopra’s Sadhana had Sunil Dutt bring home the prostitute played by Vyjanthimala as his mother’s dying wish, to pose as his wife. In “ManmadhuduA 2” I saw glimmers of the same charm as Sadhana. (IANS)