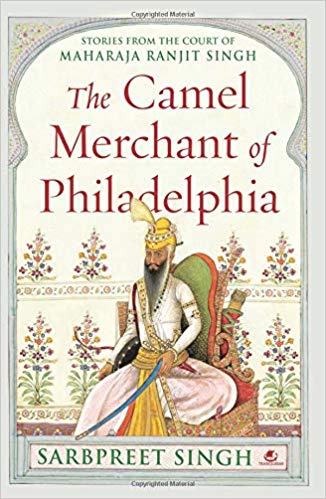 New Delhi–The secularism of Maharaja Ranjit Singh (1780-1839) needs to be stuided in the current context for the manner in which he brought together a collection of warring misls (confederacies) to create a Sikh Empire that stretched from the Khyber Pass in the west to western Tibet in the east, and from Mithankot in the south to Kashmir in the north, says US-based poet, playwright and commentator Sarbpreet Singh in a new book.

“Ranjit Singh needs to be studied, celebrated and humanised not just in Punjab but all over India. There are many unique aspects of his court, most notably his insistence on meritocracy and pragmatic embrace of true secularism, which I feel are very essential for India given where we find ourselves today,” Singh told IANS in an email interview on his book “The Camel Merchant of Philadelphia” (Tranqebar/pp 242/Rs 699).

Given the vastness of the subject, the book focuses on Ranjit Singh’s cosmopolitan Sikh court in Lahore. Beginning from the repeated invasions of Nadir Shah to the innumerable skirmishes between Afghan and Sikh misls to the rise and consolidation of Ranjit Singh’s Sukerchakias misl, the book brings alive the Maharaja’s tumultuous but effective reign.

One is introduced to Akali Phoola Singh, who won Ranjit Singh some of his most notable victories, but never fully submitted to him; the teenaged courtesan Bibi Moran, the love of Maharajah’s life; Josh Harlan, a Quaker from Philadelphia (who features in the title) who became a trusted administrator but defected to the Afghans, and many more such characters.

What could the rise of Maharaja Ranjit Singh be ascribed to? “After the collapse of the Mughal Empire, Punjab had descended into anarchy. The repeated incursion of Ahmed Shah Abdali further weakened the Mughals’ hold over Punjab.

“The only resistance Abdali encountered was form Sikhs who had consolidated into 12 misls, who were constantly jockeying against each other, but would unite in the face of an external threat. Ranjit Singh came from one of the smallest and weakest of the misls, the Shukerchakias.

“Aided in no small part by his brilliant and visionary mother-in-law, Sada Kaur, who was married into the once powerful Kahnayya misl, the young upstart was able to seize power and get himself crowned the King of Lahore, which had been the capital of Mughal Punjab. His genius became apparent quickly as he started consolidating power and through a combination of alliances and military adventures, soon became the master of the entire Punjab.

“One of the early master strokes of his reign was a treaty with the East India Company, which enabled him to secure his eastern border and continue expanding elsewhere. Despite being unlettered, Ranjit Singh was a shrewd leader, who excelled at attracting the best talent, an attribute that played a huge role in his success. His rule was marked by peace in the territories he controlled. While he ruled with an iron hand and was an absolute monarch, he was known to be scrupulously fair, never tyrannical and generous to defeated foes,” the author explained.

But as another great writer, Khushwant Singh, has separately recorded: “Ranjit Singh’s greatest oversight was his failure to train any one of his sons to take his place. When he died on the evening of June 27, 1839, there was no one fit to step into his shoes and guide the destinies of the State.”

How is it that there was no one before or after Maharaja Ranjit Singh? “The fiercely republican nature of Sikhs in the 18th century precluded the rise of a ‘king’. It was only Ranjit Singh’s genius and his mother-in-law’s foresight that made his reign possible.

“After his demise, a tragedy of Shakespearean proportions played out as every potential successor perished due to treachery or happenstance. The result was the Empire’s collapse, aided in no small part by the perfidy of the British and their ability to find willing courtiers who betrayed the Empire for their personal benefit,” Sarbpreet explains.

The author graphically explains the aftermath in the chapter titled “The Decline And Fall Of The Sikh Empire”.

“An uneasy calm prevailed in Lahore. Tumultuous events had unfolded and in one fell swoop almost the entire top echelon of the legendary court…had been wiped out. The new Maharajah, Duleep Singh, was an infant and there were constant whisperings about his legitimacy.”

As if all this were not enough, the Empire was under threat from the British, who were by then the undisputed masters of the Indian subcontinent. All this laid the foundations for the first of the two Anglo-Sikh Wars and the subsequent annexation of Punjab by the East India Company.