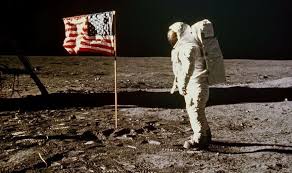 Washington– The world on Saturday celebrated the success of Apollo 11 — one of humanity’s greatest achievements — when American astronauts Neil Armstrong and Edwin “Buzz” Aldrin became the first humans ever to land on the Moon on July 20, 1969.

US Vice President Mike Pence was set to visit NASA’s Kennedy Space Center in Florida to deliver a special address. According to NASA, during his visit, the Vice President would recognize the success of Apollo 11 and address progress in NASA’s return to the Moon with the upcoming Artemis missions.

Going back to the Moon sustainably with this innovative approach will enable America to take the next giant leap — sending humans to Mars.

Apple CEO Tim Cook tweeted: “50 years ago today, millions of us were transfixed by the sight of men on the moon. In watching that astounding achievement together, our differences faded, replaced by a shared faith in humankind’s ability to realize our dreams, on Earth and among the stars”.

NASA also released stunning images from the Apollo landing sites on the Moon for a 50th anniversary reminder of what the 12 humans who walked on its surface experience visually.

“The Valley of Taurus-Littrow on the Moon presents a view that is one of the more spectacular natural scenes in the Solar System,” said Apollo 17 astronaut Harrison “Jack” Schmitt, the only geologist to walk on the Moon.

“The massif walls of the valley are brilliantly illuminated by the Sun, rise higher than those of the Grand Canyon, and soar to heights over 4,800 feet on the north and 7,000 feet on the south,” Schmitt added.

As he took his first step, Armstrong famously said, “That’s one small step for man, one giant leap for mankind.”

The Apollo 11 mission occurred eight years after President John F. Kennedy (1917-1963) announced a national goal of landing a man on the moon by the end of the 1960s.

An estimated one million people gathered on the beaches of central Florida to witness first-hand the launch of Apollo 11, while more than 500 million people around the world watched the event live on television, NASA said in an earlier statement.

The two astronauts spent more than 21 hours on the lunar surface deploying scientific experiments and gathering samples before returning to the orbiting command module, piloted by Collins. (IANS)