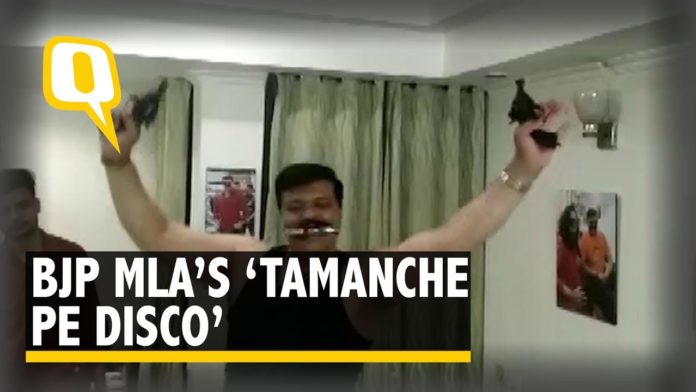 Dehradun–Three arms licenses of Uttarakhand MLA Kunwar Pranav Singh Champion, seen dancing with two pistols and a carbine in a viral video, have been suspended, officials said on Saturday.

Suspended from the party for an indefinite period after the video came out, the BJP MLA has also got a notice from the party why he should not be expelled.

“After getting reports from the Haridwar police, I have suspended three licences of (Kunwar Pranav Singh) Champion,” District Magistrate Dipendra Kumar Chaudhary said.

Under the notice, Champion has been asked to reply within 15 days as to why the licences of all the three weapons should not be cancelled, he added.

The action came following a report by Haridwar Senior Superintendent of Police Janmejay Khanduri that the licenses of the three weapons – a double barrel rifle, a revolver and a modified carbine, should be cancelled on security and safety reasons.

“There are some cases against Champion. So we have decided to recommend the cancellation of the licences,” said Khanduri.

Champion has criticized the move saying his son, who is a shooter, used to practice with these weapons. “With this decision, the sports future of my son looks bleak,” he told his supporters.

State BJP President Ajay Bhatt on Wednesday had served notice seeking Champion explain why he should not be expelled as the opposition launched scathing attack on the ruling party on the issue. Led by state Congress Vice President Suryakant Dhasmana, a host of Congress leaders sought strict action against Champion – a former Congress MLA – on the basis of this video and called for filing an FIR against him.

“In a section of media there are reports that Champion has been expelled from the party. But we want to clarify that a decision to expel Champion would be taken after the reply of Champion to the notice,” state BJP spokesman Devendra Bhasin said.

He also said that senior party leaders have also asked the central leadership to decide on the expulsion of Champion.

Dancing to the tune of “Gup Chup” song from Bollywood blockbuster “Karan Arjun”, Champion is seen holding a pistol in his mouth and a carbine in one hand while there is another pistol in the other hand. Holding a glass of whiskey, he is even seen allegedly abusing Uttarakhand.

After remaining in controversies for a long time, Champion had been suspended for three months by the ruling BJP last month, after a preliminary report prepared by the state party unit’s disciplinary committee found him guilty of gross indiscipline and also took cognizance of his alleged threats to a journalist.

A video had gone viral last month also in which Champion, the MLA from Khanpur, was seen threatening an electronic media journalist.

He was also in the news for publicly making fun of fellow party MLA Deshraj Karnawal, and later challenging him to a wrestling match to settle their long-standing dispute. Karnwal however did not turn up for the match.

Champion, who wanted a ticket for his wife for the Lok Sabha polls from Haridwar, had described the then sitting MP from the seat and now Union HRD Minister Ramesh Pokhriyal Nishank as a “migratory bird”.

Champion was among the nine Congress MLAs who had rebelled against then Chief Minister Harish Rawat and crossed over to the BJP in 2016. Later all the nine MLAs were disqualified by the Speaker under the anti-defection law. (IANS)