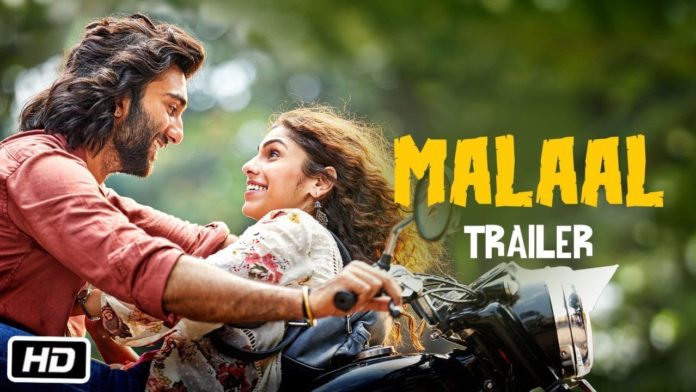 All through the screening of this film, just one question would rankle your mind and that is: Despite her heart and mind at tangent, why would a girl like Astha Tripathi who is studying to be a CA, fall in love with a guy like Shiva More?

Well, you should resign to the fact that love seeks no reason.

Set in 1998 in Mumbai, Astha comes from an upper middle-class family. They have just shifted to the chawl after her father had a bad run-up at the stock exchange.

Shiva is the son-of-the-soil, aggressive, wayward boy who is easily influenced by the local politician to further their interest. Despite being good with numbers (calculations), he is sort of a local “Dada”, (goon).

Their paths intersect a few times, till Shiva realises that he has “feelings” for her. Their love story blossoms as the narrative meanders. In the second half the pace slackens and you realise that their story is just oscillating from a full blown love story to a maybe-maybe-not, romance.

While Shiva is serious, Astha is dilly dallying. You see the hesitation in her eyes. You suspect that something is amiss, but you can’t pin point the reason.

Based on an original tale by K. Selvaraghavan, the story is sweet with all the trappings of a sweet romance. The screenplay by the director and Sanjay Leela Bhansali ensures that the songs mesh seamlessly into the narrative. The adroitly choreographed songs further highlight the culture of its cinematic universe.

The plot resorts to a couple of deux-de-machinas, though lazy, it is more than pardonable. The last half hour wraps the love story astutely and then your heart bleeds.

Debutants Meezaan and Sharmin Segal are charming and talented. As Shiva and Astha, they do full justice to their characters. Together, on screen they make a cute pair.

Ishwak Singh as Aditya, makes the other angle of this love triangle. He, like all the other supporting actors, is just there to propel the narrative forward.

The film has all the elements of a Sanjay Leela Bhansali production. The set designs and the production values of the film are of ace quality. The era and the locales are perfectly captured by Ragul Dharuman’s camera work.

The action sequences by Vikram Dahiya and music designed by SLB definitely standout in the film.