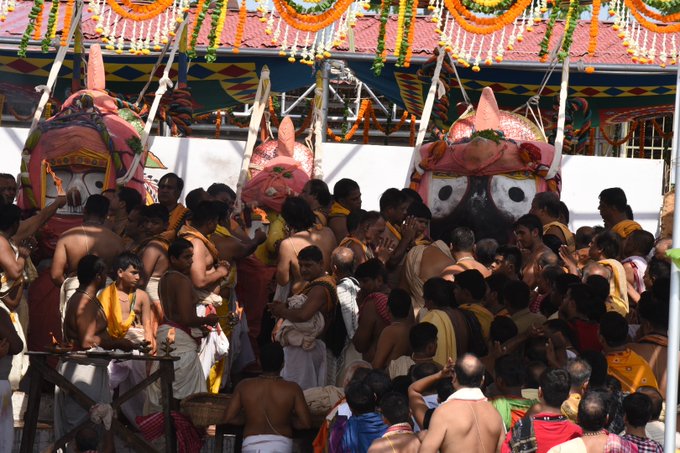 Bhubaneswar–A sea of devotees thronged the beach town of Puri in Odisha as the annual nine-day Rath Jatra of Lord Jagannath and his siblings began on Thursday.

Lakhs of people have congregated in Puri for a glimpse of Lord Jagannath, Lord Balabhadra and Devi Subhadra on the Bada Danda (Grand Road) as they travel from their home — the 12th century Jagannath temple to the Shree Gundicha temple, home of their aunt.

The deities will travel to Gundicha temple on three giant wooden chariots — Nandighosa (Lord Jagannath), Taladhwaja (Balabhadra) and Darpadalan (Subhadra) — to be pulled by the gathered devotees.

The rituals related to the annual yatra started early in the morning. Adorned with tahias (giant floral crowns), the three deities along with Lord Sudarsan were brought out of the sanctum sanctorum amid beats of cymbals, drums and gongs in a procession called Pahandia to their respective chariots parked in front of the temple.

After the deities were placed on their respective chariots, Puri Gajapati Divyasingh Dev performed Chhera Panhara on the chariots. Puri Gajapati conducted the ritual of sweeping the chariots with a golden broom, a symbolic rite showing that all are equal before the Lord.

The festival ends nine days later with Bahuda Yatra or the return journey of the deities to their abode. Though only Hindus are allowed to enter the temple on other days, people from all faiths participate in the three-km-long chariot pulling procession.

As Lord Jagannath, the God of Universe, came out of his abode to give darshan to devotees, the rain gods also showered blessings giving them respite from intense humidity.

“Greetings and good wishes to fellow citizens on the auspicious occasion of Rath Yatra. May the blessings of Lord Jagannath bring peace, happiness and prosperity to everyone’s lives,” the President tweeted.

“May the pious and noble ideals associated with the Rath Yatra enrich our lives with peace and harmony,” wished the Vice-President.

“Best wishes to everyone on the special occasion of the Rath Yatra. We pray to Lord Jagannath and seek his blessings for the good health, happiness and prosperity of everyone. Jai Jagannath,” the Prime Minister tweeted. (IANS)