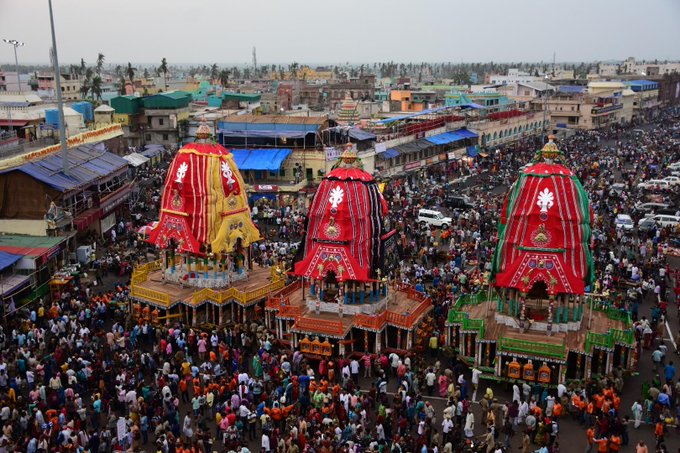 Kolkata–Soaking themselves in religious fervour, lakhs of devotees across West Bengal on Thursday celebrated the Chariot Festival or Rath Yatra, Lord Jagannath’s annual visit to his aunt’s house.

Chanting “Jai Jagannath” and “Hare Krishna” people thronged the roads and went up to the roof tops to have a glimpse of their beloved lords.

The centre-piece of the celebrations were colourful chariot processions brought out by the International Society for Krishna Consciousness (ISKCON) here and its global headquarters Mayapur in Nadia district, both of which drew huge crowds of devotees cutting across religious, social and economic barriers.

The 48th edition of the ISKCON Rath Yatra in Kolkata was inaugurated by West Bengal Chief Minister Mamata Banerjee by symbolically tugging at the ropes and following the ritual of sweeping the road with a golden broom.

“Heartiest greetings to all on the auspicious occasion of Rath Yatra. Jai Jagannath. May Lord Jagannath’s Rath Yatra bless everyone.,” she said.

Banerjee vouched for the religion that loves one and all and ended her talk with ‘Jai Bangla’.

Lok Sabha MP Nusrat Jahan, her husband Nikhil Jain and Bengali actor Soham Chakraborty were among those present and they took part in various rituals.

As the three decked-up chariots of Lord Jagannath, his brother Balaram and their sister Subhadra rolled on the streets, people in thousands pulled the ropes and happily accepted the ‘prasad’, distributed by the monks of the religious order.

The procession beginning from Albert Road would wind its way through Sarat Bose Road, Hazra Road, Ashutosh Mukherjee Road, Jawaharlal Nehru Road before reaching Maidan where the chariots would halt for seven days at the makeshift Gundicha temple.

Almost a lakh people watched in awe and pulled the carts of Lord Jagannath, Balaram, Subhadra at Mayapur, with almost 1000 ISKCON devotees from around the world braving the hot and humid conditions to dance and loudly sing kirtans through the six-km-long stretch.

Around 4,000 devotees are scheduled to visit Mayapur during the nine-day festival from 80 foreign countries like Brazil, Australia, USA, UK, China, Spain and Russia.

The novelty this year lies in the construction of a huge pandal depicting the Jagannath temple which will become the Gundicha temple, where Lord Jagannath will rest along with His siblings – Balaram and Subhadra for nine days till the return journey on July 12.

The proceedings began at the Jagannath temple in Mayapur amidst blowing of conch-shells and drum beats, as devotees began the rituals by carrying the deities from the temple to their respective chariots.

The 623rd Rath Yatra at Mahesh in Hooghly district’s Sreerampore, considered the second oldest chariot festival in the world, saw lakhs of people from various countries gathering to take a look at the gigantic four-storied iron chariot.

For the first time, Banerjee visited Mahesh Rath Yatra for the rituals.

She promised funds for development work in the area that would make the place more attractive for tourists. Banerjee also has elaborate plans for developing and beautifying Mayapur.

The festivities engulfed the entire state. Children were seen sporting new clothes and tugging miniature wooden chariots in the bylanes and lanes of the city.

A large number of fairs have sprung up in various urban and rural pockets of the state, where people relished ‘papad’ and purchased other knick-knacks.

In a spirit of celebration and obeisance, the believers sang and danced all the way to the rhythmic beats of cymbals and drums.

The festival marks the annual journey of the three deities from the 12th century Jagannath temple at Puri in Odisha, to their aunt’s residence in the Gundicha temple, 3 km away. The festival is celebrated elsewhere too in the country by the faithful.

Security has been beefed up across the state to prevent any untoward incidents. (IANS)