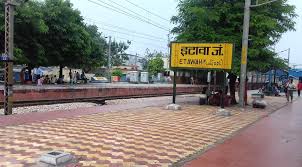 Etawah–Two inmates at Uttar Pradesh’s Etawah jail escaped in the wee hours of Sunday but one of them was run over by a train, officials said.

Ramanand, who had been serving a life term after being convicted for murder, got run over by a train while he was trying to board it.

The other inmate, Chandra Prakash, is missing and the police have launched a manhunt to trace him.

The two inmates cut the iron bars and escaped using a bedsheet.