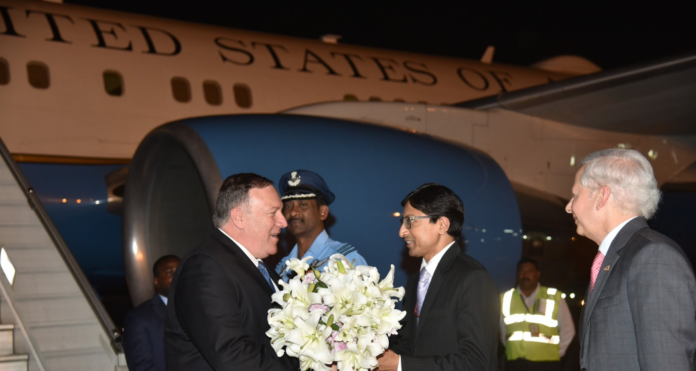 New Delhi–US Secretary of State Mike Pompeo arrived New Delhi on Tuesday night on his three-day visit to the country to strengthen strategic ties between the two nations.

He will also deliver a speech on the future of the relationship and opportunities for cooperation on global issues of shared concern.

As vibrant democracies rooted in shared values, with fast-growing economies, cultures of entrepreneurship, and leadership positions on the global stage, the United States and India are natural strategic partners, a statement issued by the US Department of State said.

US President Donald Trump and Modi are firmly committed to accelerating the upward trajectory of this partnership. Modi’s sweeping mandate in the recent elections creates a unique opportunity to realise this vision, it said.

The statement further said: “The US and India are moving quickly to achieve our shared vision for a free, open, and rules-based Indo-Pacific region by expanding cooperation in areas such as energy, aviation, and space”.

“We have elevated the level of strategic interaction between our two countries, most notably through the annual 2+2 Ministerial Dialogue that pairs the Secretaries of State and Defense with their Indian counterparts.

“The first 2+2 was held in September 2018 and culminated in the announcement of a new tri-service exercise and the signing of a secure communications agreement that will enable India to operationalize its status as a Major Defense Partner,” it said.

We anticipate holding the next 2+2 in late 2019 in Washington, it further added.

Secretary Pompeo’s visit marks the third visit to India by a Secretary of State during the Trump Administration.

The United States is India’s most important trading partner. As India’s number one overseas market, the United States purchases close to one-fifth of India’s exports. India is also the fastest growing major market for US goods, the statement said.

US defence sales to India are estimated to reach approximately $18 billion by 2019 from near zero in 2008, boosting India’s national security capabilities and increasing employment in both countries.

US companies see great opportunity in India, and increased economic openness and investment will yield mutual benefit. The Trump Administration is working to ensure that American companies operating in India have the same level playing field that Indian companies enjoy in the US, the statement said. (IANS)