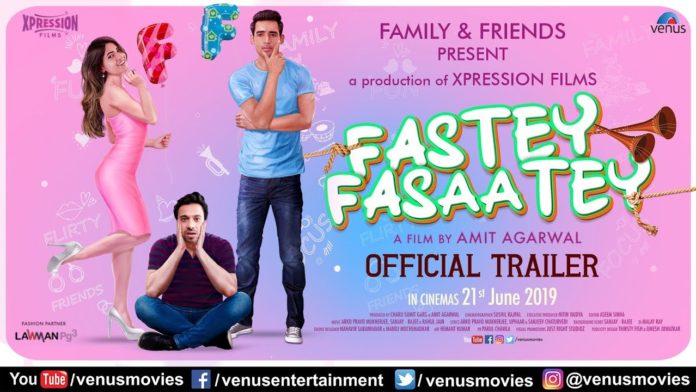 With a title like “Fastey Fasaatey”, you expect a great romantic story with an intricate plot that criss-crosses characters to ensure a good situational comedy. But instead, debutant director Amit Agarwal’s “Fastey Fasaatey” is a light hearted, sweet and not so complicated, romantic comedy that is not meant for the big screen. Its tacky writing lags far behind for a television sitcom too.

Arprit Chaudhary plays Aakash, a banker who according to his traditionally orthodox family, is a very hardworking guy who is busy with his career. He is based in Noida while his family is in Ghaziabad. But unbeknownst to them, Aakash is in an open, no-holds-barred, live-in relationship with Anisha (Karishma Sharma), a London returned lass.

Claiming to be an orphan with no kith or kin, he lives a liberated life with her in her house.

It’s only when his parents, after a forewarning from their family priest, insist that he has to get married within two months that all hell breaks loose for him. How he juggles his time with Anisha and his family, forms the crux of the tale.

The story is predictable and the plot carelessly and lazily drafted with cardboard thin characters. The writing is mediocre. They say it is all in the timing, especially when it comes to funny business. But in Fastey Fasaatey everyone’s inner comedic clock is calamitously off.

While the lead pair is charming and sincere, the chemistry between them is palpable.

Nachiket Narvekar, the son of director N. Chandra, makes his debut as Aakash’s London-based friend Dev. He adds to the melee but does not rise to the situations.

Sharib Hashmi in a miniscule role as Aakash’s brother-in-law, is wasted.

The setups are flat, the jokes don’t land and the actors, with most of the supporting cast from television, though charming and energetic, portray decent acting skills. It is the amateurish direction that lets them down.

The scenes with human dynamics appear staged. From the many instances, one example is the bedroom scene, where Aakash is hesitant to tell Anisha something, so he switches the lights on and off while Anisha is reading a magazine. Her reaction to Akash’s action is so cold and mild that we realise that there is no salvation for this film.

Overall, with a decent production quality, the film manages to exude a fairly aesthetic look.