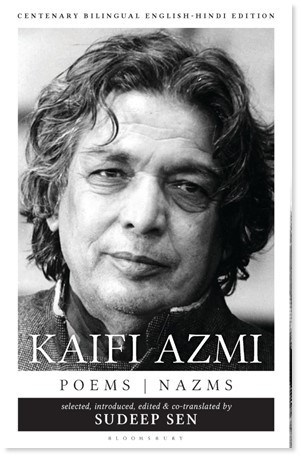 New Delhi– This weekend, go through the fictional story of a woman with unexpected inheritances and the transformation that ensued; travel with a Buddhist monk who decided to venture out of his comfortable monkhood; and finally in the 100th year of Kaifi Azmis birth, read some of his greatest poems and ‘nazms’.

Written by Forward Prize-winning author Tishani Doshi, “Small Days and Nights” is the story of a woman caught in a moment of transformation, and the sacrifices we make to forge lives that have meaning.

Escaping her failing marriage, Grace has returned to Puducherry for her mother’s funeral. Once there, she finds herself heir to an unexpected inheritance. First, there is the strange pink house, and then there is the sister she never knew she had – Lucia, who has spent her life in a residential facility.

Soon Grace sets up a new and precarious life in this lush, melancholy wilderness, with Lucia, village housekeeper Mallika, dryly witty auntie Kavitha and an ever-multiplying litter of puppies. But Grace’s attempts to play house first proves to be a struggle, then a strain, as she discovers the chaos, tenderness, fury and bewilderment of life with Lucia.

2. Book: In Love with the World: A Monk’s Journey Through the Bardos of Living and Dying; Author: Yongey Mingyur Rinpoche; Publisher: Spiegel & Grau; Price: Rs 399; Pages: 268

At 36, Yongey Mingyur Rinpoche was a rising star within his generation of Tibetan masters and a respected abbot of three monasteries. Then one night, telling no one, he slipped out of his monastery in India with the intention of spending the next four years on a wandering retreat, following the ancient practice of holy mendicants. His goal was to throw off his titles and roles in order to explore the deepest aspects of his being.

He immediately discovered that a lifetime of Buddhist education and practice had not prepared him to deal with dirty fellow travellers or the screeching of a railway car. But when he ran out of money, he began his life as an itinerant beggar in earnest. Soon he became deathly ill from food poisoning and his journey took a startling turn. His meditation practice had prepared him to face death, and now he had the opportunity to test the strength of his training.

In this account of the inner life of a Buddhist master, Rinpoche offers us the invaluable lessons he learned from his near-death experience.

The bilingual English-Hindi collection is produced by a group of fine translators, poets, scholars, and filmmakers — Husain Mir Ali, Baidar Bakht, Sumantra Ghosal, Pritish Nandy and Sudeep Sen. In addition, the book contains a selection of rare archival photographs of the life and times of Kaifi Azmi going back to his childhood.