Jaipur– Actress Sunny Leone’s son is still a toddler, but that didn’t stop her from making him dance to a Punjabi number.

Sunny of the “Baby Doll” fame took to Instagram on Sunday to share a video in which she is seen holding on to her baby and dancing to the song “Gaddi moudan ge” along with actor-host Rannvijay Singha.

She captioned the video taken at an airport: “Off to #mtvsplitsvilla season 12! #SunnyLeone #TikTokwithSunny #returnoftiktok.”

The former adult film star and her husband Daniel Weber adopted a girl child, Nisha, in 2017 and announced birth of her sons, Noah and Asher, via surrogacy last year.

Currently on a work trip to Jaipur, she is setting the town on fire by posing in a floral bikini. “Pulled this bikini after a long time! Time for a swim in my private villa pool here in Jaipur,” she posted on Instagram on Monday.

Mumbai– Actor Ayushmann Khurrana is feeling the excitement in the air as he has started shooting for “Bala” here.

“Excitement is in the hair…err air. The shooting for ‘Bala’ begins today,” Ayushmann tweeted on Monday.

The film is about a man who is balding prematurely and how he deals with it.

The film is being directed by Amar Kaushik.

“This time, last year we were shooting ‘Stree’, and it’s surreal that we are starting another film with Amar today. ‘Bala’ is entertaining, witty and lovable, and we have a great cast to tell this story,” Vijan said in a statement.

According to a source, Ayushmann’s nickname in the film is Bala and thus the title.

The film also features Saurab Shukla, Jaaved Jaaferi and Seema Pahwa in pivotal roles. It will be shot in Kanpur as well.

Priyanka has a ‘How I Met’ Nick story for her kids 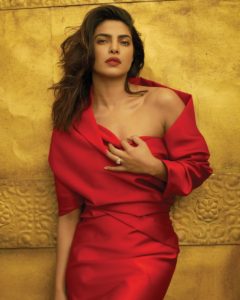 With the annual Met Gala happening on Monday, Priyanka, 36, expressed some nostalgia when she shared a set of photographs of her and Nick, 26, from the 2017 ball on her Instagram, reports people.com.

Priyanka says she will definitely tell her and Nick’s future children about their Met Gala love story.

It was in 2017 at the Met Gala that Priyanka and Nick walked a red carpet together for the first time.

“The story I’ll definitely tell our future kids… How I ‘Met’ your father,” she wrote, adding several red heart emojis.

The quote is a nod to the hit sitcom “How I Met Your Mother”, in which a father recounts he and his wife’s love story to their two children.

Priyanka and Nick weren’t an official couple when they posed together on the red carpet that year, but the photographs sparked speculation that perhaps a romance was brewing between the two.

Almost a year later, the pair were engaged in July 2018 after two months of dating. They tied the knot in December last year with an extravagant wedding celebration that spanned three days in India.

There can’t be another Pammi or Dev: Sangita Ghosh

New Delhi– Actress Sangita Ghosh says she is very attached to “Des Mein Nikla Hoga Chand”, which premiered in 2001, and that she is sure there can’t be another Pammi or Dev — characters played by her and Varun Badola in the popular show.

It’s raining reboots and remakes on the small screen. Asked if she would like “Des Mein Nikla Hoga Chand” to get a remake, Sangita told IANS: “I have a special bonding with that show. I am sure there can’t be another Pammi or Dev… the way Varun and I played the characters.

“If it is ever remade, maybe the names will be the same but the characters will be different. So, I don’t know. I am very attached to it so, I wouldn’t like to imagine it with someone else,” she added.

Sangita is currently seen in the show “Divya Drishti” as a ‘Pishachini’.

In the photograph shared by Gauri, she is seen holding onto AbRam who is sitting on her lap. Sitting on either side of them are Karan’s twins Yash and Roohi.

AbRam looks most mischievous in a pair of shorts and a cool blue t-shirt. His style is on point with a blue shoe and a red shoe on each of his feet.

Gauri looks casual but chic with her hair tied loosely.

Mumbai– Actress Shriya Pilgaonkar has been roped in for Sneha Taurani’s “Bhangra Paa Le”. She will be making a special appearance, but “her character is extremely important to the film”.

“It’s a beautiful track set in the 1940,” said a source. “I’m excited to be part of Sneha’s debut film ‘Bhangra Paa Le’. She is so much fun to work with,” Shriya said in a statement.

“My track with Sunny in the film is beautiful. I was shooting in Punjab first time and I loved it. RSVP has been doing some really good work and I’m happy to be part of one of its upcoming films,” she said.