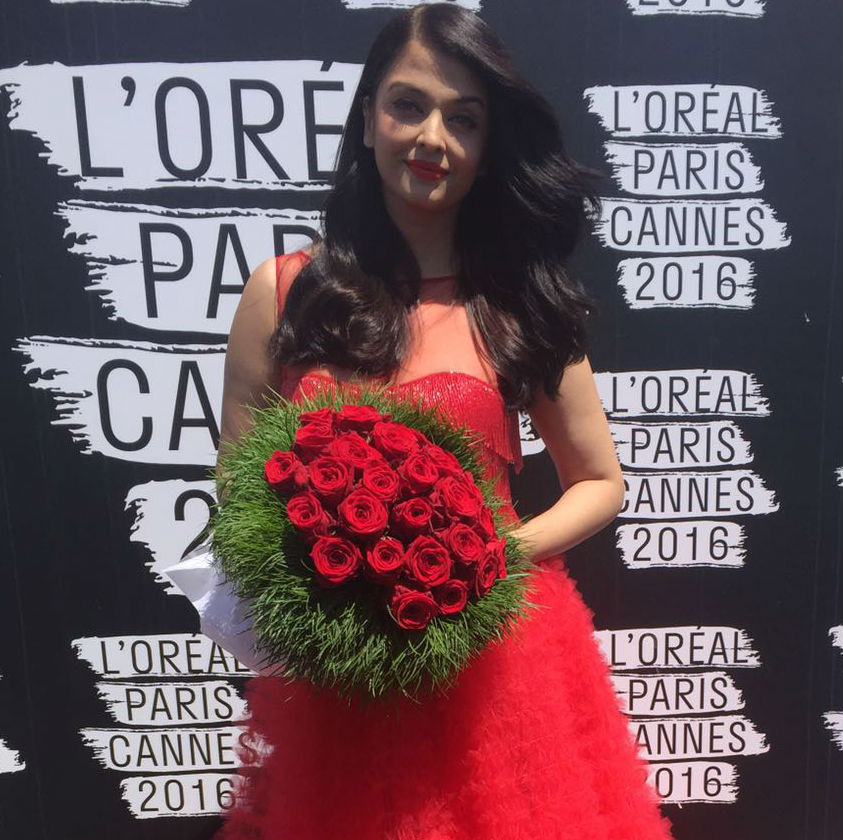 The Bachchans had gone on a family dinner at a restaurant here, and some social media users could not stop but troll Aishwarya for holding Aaradhya’s hand — something that she does often in public.

Fans chided the actress for being an over-protective mother.

One Instagram user wrote: “Aish needs to cut the umbilical cord. The girl is in her eighth year”.

Another wrote: “Please leave her hand Aishwarya and walk her freely.”

“Hope her daughter doesn’t get shoulder pain by this position always,” a user stated.

Another replied: “For God’s sake leave her hands. She is not three years old”.

On the work front, Aishwarya was last seen on-screen in “Fanney Khan” opposite Anil Kapoor and Rajkummar Rao.

Mumbai– On Maharashtra Day on Wednesday, Bollywood actor-producer Aamir Khan indulged in a voluntary contribution of labour in the state’s Koregaon Taluka of Satara district, along with his wife Kiran Rao.

They were accompanied by Jalamitras who came forward to help Aamir and his non-profitable organisation, Paani Foundation.

After receiving a warm welcome, Aamir Khan headed to a certain location and started digging the ground for ‘shramdaan’. He got support from villagers who also got inspired and joined him in the activity, according to a statement on his behalf.

On Tuesday, the actor was at Zhawadarjun village where he stopped by for sugarcane juice on the way.

On the work front, Aamir has the film “Lal Singh Chadda”, a remake of “Forrest Gump”.

Malaika was photographed outside a yoga studio. Her sparkling white t-shirt had ‘Love’ scribbled across, and it seems like a cryptic message for Arjun Kapoor.

She completed her look with black yoga pants and black sneakers. With her hair pulled back and tied in a low bun, Malaika chose to go minimalistic with her make-up.

On the work front, Malaika was seen in the song “Hello Hello” from the movie “Pataakha”. Arjun, on the other hand, is currently working on Ashutosh Gowariker’s historical drama, “Panipat”.

Mumbai– Actor Akshay Kumar chose to evade a question about not voting in the Lok Sabha elections here, and walked away.

Akshay, who recently grabbed headlines for his “non-political” interview with Prime Minister Narendra Modi, has been widely trolled for not casting his vote on Monday.

“Chaliye, chaliye (let’s go, let’s go)” is how Akshay responded when at a special screening of the film “Blank” on Tuesday, a mediaperson asked him about giving voting a miss.

He then walked away.

The actor has established his image as Bollywood’s posterboy of patriotism with films like “Kesari”, “Baby”, “Holiday – A Soldier Is Never Off Duty” and “Airlift”.

The fact that he missed voting gave trolls a field day with jokes and memes.

On Tuesday, the “Padmaavat” actress, daughter of ace badminton player Prakash Padukone, shared a video of herself scoring a perfect basket on a basketball court. She was playing alone and the moment was recorded in slow-motion.

She captioned the video: ” All work and no play… You get the drift.”

Ranveer, who married Deepika in Italy last year, dropped a comment on the video which read: “Ballin”.

The video has already clocked over three million views on Instagram and has more than 5,000 comments with fans praising her fitness and sports skills.

On the Bollywood front, Deepika will next be seen playing an acid attack survivor in Meghna Gulzar’s “Chapaak”, while Ranveer will be essaying the role of former Indian cricket captain Kapil Dev in the upcoming movie “’83”.

Rahman to miss ‘The Voice’ finale, Asha Bhosle to step in

Mumbai– Ace composer A.R. Rahman will not be a part of the grand finale of music reality television show “The Voice”, which will have legendary singer Asha Bhosle as a celebrity guest.

“Unfortunately can’t make it to the great grand finale of ‘The Voice’ on Star Plus due to my health,” Rahman tweeted on Wednesday.

“Wishing the best to the top 4 contestants. Shine bright and make us proud. God bless,” he added.

Rahman has been a ‘Super Guru’ on the show, in which the contestants have been coached by Adnan Sami, Kanika Kapoor, Harshdeep Kaur and Armaan Malik.

Adding to the excitement of the show, Asha will be joining the coaches as a celebrity guest.

New Delhi– Actor Kunal Kemmu says he would love to play the uncles role in “Hum Hain Rahi Pyar Ke” if a remake is made.

Directed by Mahesh Bhatt, “Hum Hain Rahi Pyar Ke” is a romantic comedy-drama film featuring Aamir Khan and Juhi Chawla. Kunal was a child actor in the film, which revolved around a man named Rahul (Aamir), who had to bring up his spoilt nephews Sunny, Vicky and niece Munni.

Asked about his thoughts on a “Hum Hain Rahi Pyar Ke” remake, Kunal told IANS: “Yes! I have thought over it and it would be interesting to play the uncle this time and have three children. However, it only makes sense if my character Sunny from that film has kind of grown up and he is in a similar situation.”

“I don’t know if classics like that should be remade, but in case they do, then one has to do full justice to it.”

The 35-year-old actor said he would be eager to watch the remake as an audience too. (IANS)