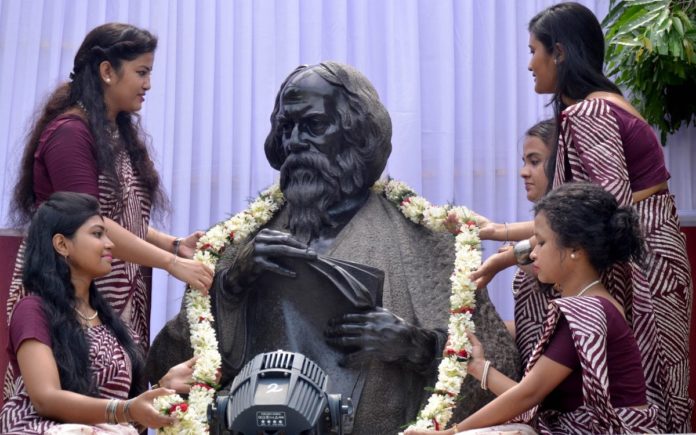 Kolkata– People in West Bengal on Thursday paid homage to Asia’s first Nobel Laureate Rabindranath Tagore on his 158th birth anniversary, with his songs, poems and plays reverberating across the state.

It has been an age-old custom to celebrate Tagore’s birthday as per the Bengali calendar.

Tagore, who holds the unique distinction of having composed the national anthems of two countries – India and Bangladesh – was also remembered in Bangladesh and many other countries of the globe by Bengali culture enthusiasts.

The celebration of the bard’s birth anniversary is all about bringing him alive through his popular songs, enactments of his plays and readings from the works of the polymath.

People donning ethnic attire and participating in the celebrations is a common sight in different educational institutions, clubs, cultural institutions and localities across the state.

Cultural programmes, including the famous dance dramas composed by Tagore, were organised in large numbers. Political parties and non-governmental organisations also joined in.

Like every year visitors gathered outside Tagore’s birthplace Jorasanko Thakurbari (the sprawling ancestral house of the Tagores at north Kolkata’s Jorasanko), where the room where he was born was thrown open to the public through the day. Well-known singers, elocutionists and dancers participated in a cultural programme in the courtyard of the house.

Special prayers were organised in Birbhum district’s Shantiniketan – the knowledge town of Tagore’s dreams that blossomed into the Viswa Bharati University in 1921.

“Where the mind is without fear, the head is held high… I extend respect to the world poet Gurudev Rabindranath Tagore on his birth anniversary,” Banerjee tweeted. (IANS)