MARLBOROUGH, MA— Vishwa Hindu Parishad of America, a national organization whose objectives are to unite Hindus by instilling in them devotion to the Hindu way of life, to cultivate self-respect and respect for all people, and to establish contacts with Hindus all over the world, will bestow the Distinguished Individual Award, known as “Samskriti Saurabh Samman” to Dr. Manju Sheth, co-founder of non-profit INE MultiMedia and Host of INDIA New England News’ celebrity interview series Chai With Manju.

Dr. Sheth will be honored with the “Samskriti Saurabh Samman” on Hindu Heritage Day, a multi-event festival that will be held on Saturday, May 18, 2019, from 3:00 PM to 8:00 PM at Marlborough Middle School located at 25 Union Street in Marlborough, MA. The Governor of Massachusetts has declared this day as the Hindu Heritage Day for the past 16 years.

“For 2019, VHPA presents Distinguished Individual Award to Dr. Manju Sheth, MD, co-founder and CEO of INE Multimedia and host of INDIA New England News’ popular celebrity series Chai with Manju,” announced VHPA. “Apart from woman empowerment, Dr. Sheth prides herself in providing a platform for others and in showcasing our community stars and contributors/achievers. Her proudest achievement is creating and conceptualizing ‘New England Choice Awards’.”

This year marks the 23rd celebration of Hindu Heritage Day in Greater Boston area. In the past years, this event has showcased exuberant displays of artistic and spiritual heritage from Sri Lanka, Cambodia, Thailand and India.

“As you know Indians living in Greater Boston area have their roots in Bharat and its rich ancient culture,” said Sanjay Kaul, one of the key organizers of the event. “The celebration of Hindu Heritage Day is an attempt to pass our heritage to the coming generations in order to keep it strong and vibrant.”

Mr. Kaul said that Dr. Sheth is being honored for her professional achievements that include her service as an internist focused on women’s health and her service to the area of medicine as the past president of the Indian Medical Association of New England. She is also being honored for her service as the President of the INE Multimedia, a nonprofit organization dedicated to empowering, entertaining, and educating the Boston community. Under her direction, the non-profit organization is involved in promoting cultural activities in Greater Boston area.

In addition, she is a role model as she stands for woman’s empowerment, and encourages promoting women by providing a platform where women are recognized for their achievements and contributions showcasing our community stars.

“Among this year’s recipients, we have Dr. Manju Sheth whom we are honored to recognize for her exemplary vision, dedication, spirituality and devotion in service of the community. The work she nurtures is a shining example of her selflessness,” Mr. Kaul said. “Dr. Manju Sheth serves as an inspiration and as an eternal reminder that Seva and Sacrifice are at the core of Hindu Dharma.” 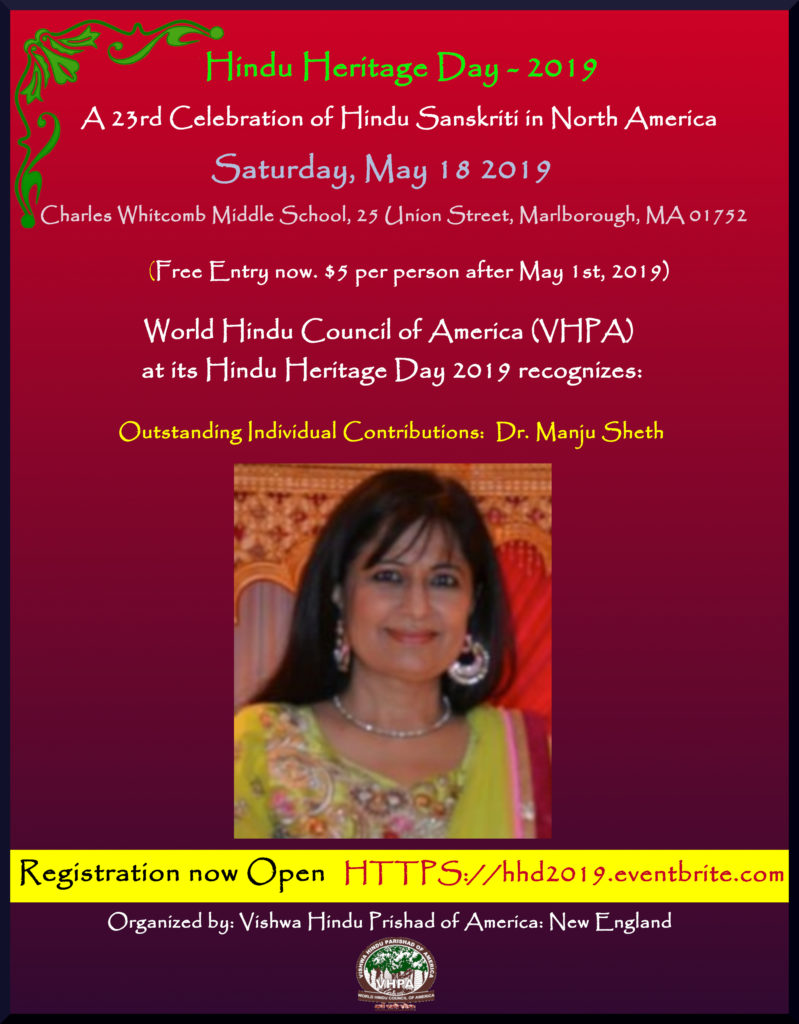 The Hindu Heritage Day organizing committee includes members from a host of socio-cultural organizations in the Greater Boston area. Thousands of people from the area in their colorful traditional attires attend this vibrant festival and enjoy authentic Indian music, songs, dances, food and Mela. Hundreds of participants including as little as five years old showcase their talent and make the celebration more energetic and entertaining.

Dr. Sheth, a physician and former president of Indian Medical Association of New England, said she was grateful for the award coming from VHPA as her father, Mohan Chawlani, was a proud Hindu.

“This one is for my dad. He was a proud Hindu who taught us to appreciate and respect all religions and goodness in every human being,” Dr. Sheth said. “My gratitude to World Hindu Council of America for this honor. This would have made my dad very happy.”

Dr. Sheth, is an internist focused on women’s health and works at Beth Israel Lahey Health. In 2013, she served as the president of the Indian Medical Association of New England.

Dr. Sheth is the President of the India New England Multimedia, a nonprofit organization dedicated to empowering, entertaining, and educating the Boston community. She is the Creator and Co-producer of The New England Choice Awards, where they celebrate industry leaders in several important categories. She is also the director and hostess of ‘Woman of the Year” that has honored 20 women in various fields every year for the past 17 years. She has received numerous awards for her community work and advocacy and was voted “Woman of the Year” in 2011, featured as a “Notable Bostonian” in the Boston Globe, and was voted in the “150 Women of Influence” by the YWCA Boston and amongst 50 most influential Indians in NE in 2012.

She has served on the Clinical advisory committee at Harvard Pilgrim Health Care and was appointed in February 2018 to the prestigious Patient Care Assessment Committee at Harvard Pilgrim Health Care. With INDIA New England News, she co-founded the New England Health Expo in 2013. It is the largest South Asian Health Expo in North America. She has written a successful series for Lokvani titled “Movers and Shakers in Medicine” which featured the well-known Indian American doctors in New England who have made a huge difference globally in world of medicine.

In addition to her medical career, she is passionate about women empowerment. In recent years, Dr. Sheth has led many fund raisers for local charities including Saheli, which provides support to South Asian domestic violence victims in the Boston area. She has also served on the fund-raising committee of Akshaya Patra for many years & is the NE community Ambassador. Previously, she served as a member of the Board of Directors of the Asian Task Force Against Domestic Violence. In addition, Dr. Sheth was a trustee of the Indian American Forum for Political Education, which helps increase political awareness among South Asians.