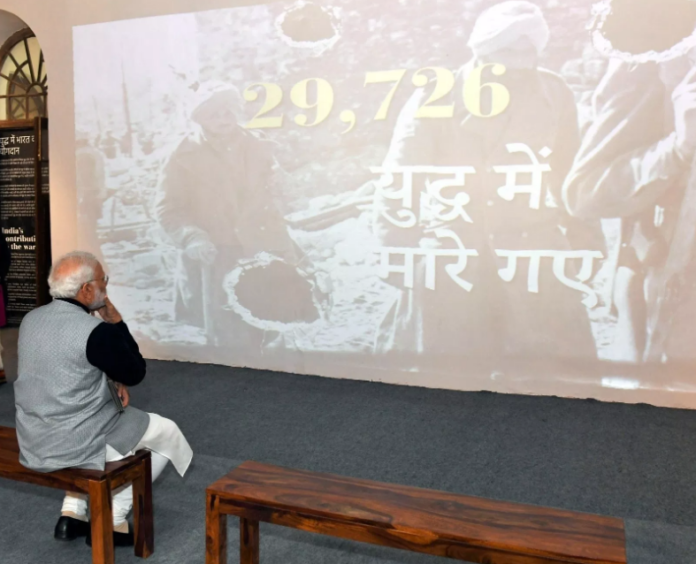 New Delhi– “I could hear shots being fired from my house near Jallianwala Bagh. I rushed there and saw heaps of bodies lying on top of each other. I sorted through them until I found my husband”. Thus goes Ratan Devi’s account, just one of the many hundreds who lost their loved ones in a heart-wrenching tragedy that still resonates a century down Indias timeline.

Housed in Delhi’s Red Fort complex, the newly-opened Yaad-e-Jallian’ museum remembers one of the most brutal injustices suffered by Indians at the hands of the British colonial rulers.

As one makes their way inside the museum, the reconstruction of events before, during and after the fateful day of April 13, 1919, chills one to the bone.

They hark back to the day when troops of the British Indian Army led by General Reginald Dyer caused mayhem by opening firing on an unsuspecting crowd of about 20,000 people – mostly Sikhs – for twenty minutes, causing many deaths and casualties. To this day, the Sikh holy city of Amritsar nurses its wounds.

For anyone even remotely connected to India, the massacre is not just registered in history, but also in their minds.

What one would recall from these oft-told tales is a water-filled well that people jumped into to escape the flying bullets, only to die within it. To commemorate that, the museum’s curators have create a life-sized well that visitors see right when they enter, with the song “Aao Bachchon Tumhe Dikhaye” from the film “Jagriti” playing in the background.

A major attraction is the four sided flame-shaped obelisk in a room on whose walls are etched the names of those who died in the firing.

The museum, rich with information on the massacre, informs: “General Dyer had been summoned to Amritsar and the city was handed over to him to maintain law and order. He had put a ban on public meetings and gatherings but unaware of his proclamations, people were as usual gathering at Jallianwala Bagh to celebrate Baisakhi and to peacefully protest against the arrest of their leaders (Dr Satyapal and Dr Kitchlew)”.

Thus, the sound of his armoured cars and the troops marching to the Bagh were lost amidst the cacophony of the celebrations. The sudden firing, with no warning, caused mass panic, leaving people helpless.

Punjab’s Lt. Governor that time, Michael O’Dwyer, is widely cited as an endorser of the firing.

“Speaking with perhaps a more intimate knowledge of the then-situation that anyone else, I have no hesitation in saying that General Dyer’s action that day was the decisive factor in crushing the rebellion,” the museum quotes “a shameless O’Dwyer” as having said.

A panel also mentions a seven-member Hunter Committee that was established “under public pressure” by the British government to inquire into the events. A few steps down, a series of questions asked to Dyer by the committee, and his answers find space.

“When you got into the Jallianwala Bagh, what did you do?”

In its report, the Hunter Committee said that Dyer’s conduct rested upon an “honest but mistaken conception of duty”, while an Indian report called the slaughter “a calculated piece of inhumanity towards utterly innocent and unarmed men”.

One of the end panels of the museum, curated by leading experimental marketing agency Tagbin and established by Archeological Survey of India, mentions revolutionary Udham Singh, who assassinated O’Dwyer 21 years after the 1919 massacre.

“I did it because I had a grudge against him. He deserved it. What greater honour could be bestowed on me than death for the sake of my motherland,” were his last words before he was sentenced to death for murder.

Hosting a portion of Amritsar’s historical struggle in Delhi, ‘Yaad-e-Jallian’ is a must-visit on the centenary of the Jallianwala Bagh massacre. (IANS)