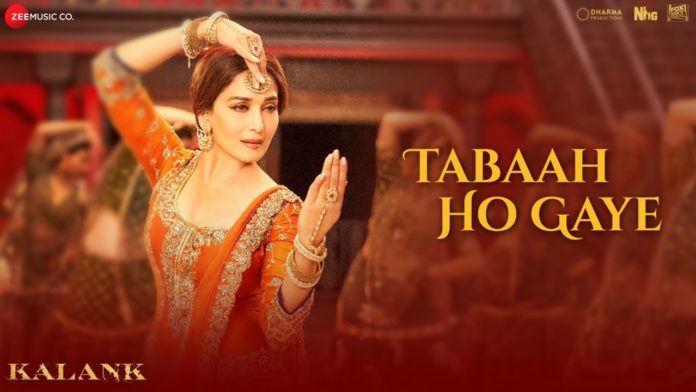 Audiences have at last caught a glimpse of Madhuri Dixit in the latest song from the highly anticipated film Kalank. Titled Tabaah Ho Gaye, the song feature’s Madhuri’s character Bahaar Begum in a spectacular dance sequence as she expresses her yearning for love.

The track has been penned by Amitabh Bhattacharya and choreographed by Saroj Khan and Remo D’Souza, whilst Shreya Ghoshal provided vocals.

The song evokes the splendour glimpsed in the trailer, with the song set within a grand hall. Madhuri demonstrates the legendary dance skills that audiences have love numerous times in the past and here too, giving true spirit and character to Remo D’souza’s brilliant choreography.

‘Tabaah Ho Gaye’ also marks the reunion between Madhuri and playback singer Shreya Ghoshal, who have worked together on some of Madhuri’s most memorable songs in her career.

The video hints at Bahaar Begum’s desire for a deeper love. In a film centred around relationships and forbidden love, audiences will be intrigued to see how Bahar Begum’s yearning for love plays into her relationship with the other characters and romances within the film.