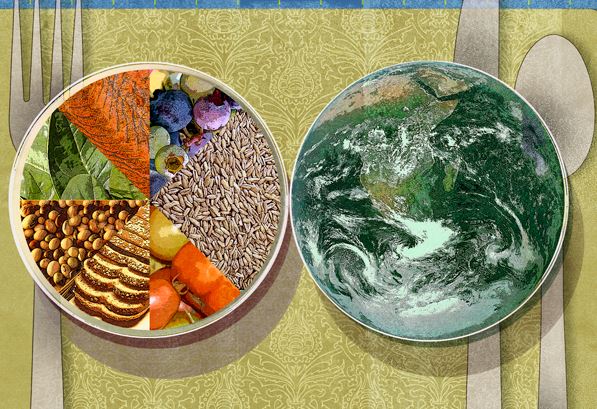 The University is embarking on an ambitious new plan aimed at empowering people to upgrade their eating habits. Don’t worry, you’ll still be able to get French fries and indulgent desserts when you want them, but Harvard’s Sustainable Healthful Food Standards, released today, are hoping to show you the path to better health — for you, and the planet.

“In today’s world, the situation is not encouraging from a planetary or human health standpoint,” said Walter Willett, Fredrick John Stare Professor of Epidemiology and Nutrition and chair of the Department of Nutrition in the T.H. Chan School of Public Health. “And of course these are not totally distinct. Human health depends on a healthy planet.”

Willett, who was faculty co-chair of the multidisciplinary faculty committee convened to develop the new standards, also co-chaired the EAT-Lancet Commission, a groundbreaking report presented in Oslo in January that brought together 37 of the world’s leading experts on nutrition, agriculture, biodiversity, and the environment to reach a scientific consensus on what constitutes and healthy and sustainable diet. “Our basic task was to see if there is a way to achieve a healthy diet for everyone and also get back on track to stay within the planetary boundaries that have been identified by work in the earth sciences,” Willett said.

The Harvard food standards use the same body of data as EAT-Lancet to set goals that over time will measurably increase access to healthy, culturally appropriate foods for students, faculty, staff, and visitors while also enhancing food literacy and lessening the University’s impact on land, air, and water. The standards were also informed by Menus of Change principles, a collaboration led by the Culinary Institute of America and the Harvard Chan School, as well as the set of values underlying the Good Food Purchasing Program recently passed by the Boston City Council. Among the objectives of the new initiative are to get major on-campus food-service providers to track food purchases by category to help monitor climate impacts, to prioritize certified-sustainable seafood and regional purchases, and to curtail wasted food and single-use containers and utensils while reducing the use of food treated with antibiotics and chemicals, increasing healthy choices, and considering the welfare of workers, communities, and animals all along the food chain.

“If we don’t shift our diets to healthier and more sustainable, it’s going to take an immense toll,” said the other faculty co-chair, Aaron Bernstein, instructor in pediatrics at Harvard Medical School, co-director of the Center for Climate, Health, and Global Environment at the School of Public Health, and an associate at the Harvard University Center for the Environment.

The statistics are alarming. “We still have close to a billion people on the planet who are undernourished,” Willett said. “And about 2 billion who are obese or overweight. And the quality of the diet for most other people is still poor and will lead to premature death from cardiovascular disease, cancer, and diabetes and its complications.”

On the environmental side, Bernstein added, “If it were considered as a country, food waste would be the third largest emitter of greenhouse gases after China and the United States. Plus, something like 70 percent of fresh water draws around the world are producing food, 30 to 40 percent of which gets wasted. So this is a crucial issue for everyone in the world.” Animal waste, fertilizers, and pesticides also affect human health, he pointed out.

One of the challenges of instituting the new standards at an institution as large and decentralized as Harvard is that while many universities use only one food vendor, Harvard uses many. But that also provides opportunity. “We have partners that reach well beyond the University,” including the Compass Group, which serves 10 million meals a day around the world, Bernstein said.

“Harvard is a thought leader and an action leader,” said Willett. “That’s why it’s especially important that Harvard and other universities adopt good policies in this area.”

Other challenges, “We don’t even know yet,” said Bernstein. To find out, the University will do what it does best: research. “We’ve collaborated with faculty and researchers to identify a few data points that are important to track over time — for example, the biggest drivers of environmental impact, like how much red meat you purchase,” said David Havelick, sustainability manager in the Office of Sustainability, who led the drive to develop the standards. “And we’re tracking the demand side, not just the supply side. Students could be choosing healthful, plant-based foods in the dining hall and cafeterias, for example, which will help the food vendors meet their goals.” The Office for Sustainability’s Living Lab initiative is designed to immerse students in such interventions, and a student in the Harvard Chan School has already used focus groups to study what works and what doesn’t as part of the Sustainable Meeting and Event Guide released in 2018.

“We’re not setting minimum standards and then stopping there,” said Havelick. “We’re trying to encourage innovation and goal-setting among our food-service professionals, the farmers they work with, and faculty and students. Many of them are already leading on many fronts. We’re trying to set up a framework where we prioritize the right things and make sure we learn throughout the process. We want to take the research being done here at Harvard and around the world and put it into practice, because if we can’t do that effectively, we won’t be able to develop solutions that can be scaled well beyond our campus.”

The task of improving nutrition and sustainability worldwide is daunting, Willett and Bernstein admit, but they point to other public health efforts that are slowly succeeding. U.S. red meat consumption, for example, is down 40 percent from the 1970s, according to Willett, and the Centers for Disease Control and Prevention has reported that smoking rates are at a record low.

“We have to have some hope here or we will have a disaster,” said Willett. “But clearly big things are happening.”