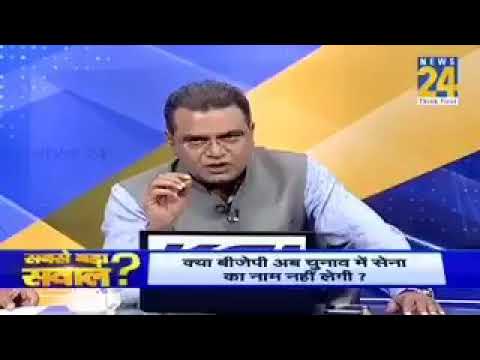 New Delhi– With the Lok Sabha polls approaching, the politicians are busy attacking each other with sharp criticism. In a similar case, Congress spokesperson Alok Sharma on Saturday threw a glass of water on the Bharatiya Janata Party (BJP) spokesperson KK Sharma during a live TV debate.

In the video, that has now gone viral on social media platforms, Alok Sharma lost his cool when his BJP counterpart called him a “traitor” multiple times. In the fist of rage, he assaulted the BJP spokesperson by throwing a glass of water on him.

The water splashed over anchor’s jacket, leaving him drenched. The anchor had to change his outfit to present the remaining programme.

Though no one was hurt pieces of glass could be seen across the studio.

The BJP spokesperson asked Alok Sharma to apologise for his behaviour. At the same time, the Alok Sharma continued his stand and asked for an apology for being called a traitor. (IANS)