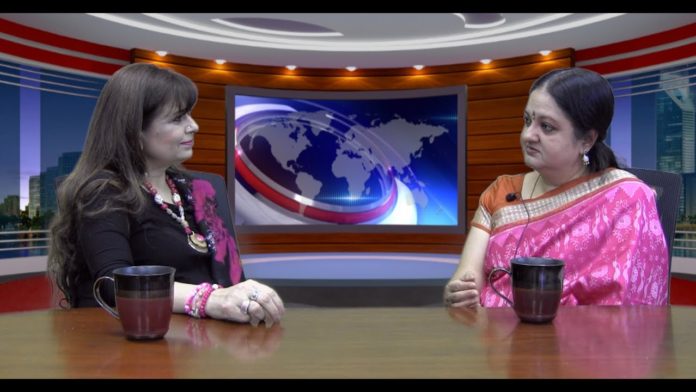 BURLINGTON, MA—Carnatic music teacher Tara Anand, who will receive Lifetime Achievement Award at the 17th Annual Woman of the Year Awards Gala on May 17, is a quiet, serious musician and teacher, whose students have been winning numerous awards every year at the prestigious Cleveland Tyagaraja Aradhana music festival since the 1990s.

During a recent Chai With Manju interview, Ms. Anand talks about music, teaching music and her own fascination with Bollywood favorites while growing up in New Delhi.

Ms. Anand, who started learning music at an early age of four, credits her father for her love of music.

“The person who started it all was my father,” says Ms. Anand. “It was his passion.”

Ms. Anand will receive the 2019 Lifetime Achievement Award on May 17 at the 17th Annual Woman of the Year gala, where 20 outstanding women in the areas of science, technology, business, healthcare, arts and culture, and community and social services will also be honored. The event will be attended by about 500 business and community leaders, philanthropists and professionals.

To buy a ticket for the Woman of the Year Awards gala please click here.

Ms. Anand founded Anubhava School of Music in 1987. She teaches Carnatic music, which is the Classical music of South India and has an immensely rich tradition dating back thousands of years, with an equally grand tradition of performers over the years.

Ms. Anand has also played with her guru Smt. T. Rukmini. The Hindu, a national newspaper of India, at various times, commented about the “chaste classicism” of this “accomplished violinist” and the “sweetness, strength and an emotive quality” of her “finely modulated and attractive voice” as a vocalist.  It also said that her “admirably phrased Begada did not recall any familiar style but testified to original gnana (insight).”

Ms. Anand has been teaching music – both vocal and violin – for over three decades and is one of most sought after teachers in the area. Her teaching is marked by rigorous standards, care and concern for her students and an infectious love of music. Tara has received national awards in India and USA. She has received awards from the Music Academy, Krishna Gana Sabha , two long standing traditional  music academies in Chennai, India.

In the United States, she was awarded the Best Teacher award at the Cleveland Tyagaraja Aradhana Festival, a result of her students’ continued success at their annual competitions. Her students have also evolved into seasoned musical artists and continue to enrich the musical community with their talent and avid passion for Carnatic music.