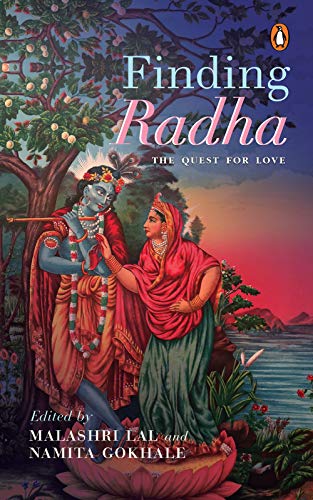 This anthology is a tribute to Radha, whose character has remained a mystery and captured the imagination of many writers across centuries.

No other goddess combines the elements of bhakti and Shringara quite as exquisitely as the divine milkmaid. She spans a vivid range imagery – from the playfulness of the Raas Leela to the soulfulness of her undying love, from the mystic allure of depictions in poetry, art and sculpture to her enduring legacy in Vrindavan.

In a way that sets her apart from other female consorts. Radha is idealised and dreamed of in a way that is almost more elemental than mythical.

Edited by Malashri Lal, a professor in the English department of the University of Delhi and writer-publisher Namita Gokhale, the anthology deals with the historical as well as the artistic dimensions of the eternal romance of Radha and Krishna.

As many as 22 scholars and writers have contributed their perspectives of Radha. These include perspectives on how the visualisation and iconography of Radha evolved, through the Chaitanya school of Vaishnavism, and the philosophical and poetic interpretations of the Bhakti movement.

Gokhale in the introduction describes Radha as “an all-too-human goddess, a sublime yet sensual emblem of mortal and divine love.”

“She is subversive in that she possesses an autonomy rarely available to feminine deities. She lives by her own rules and not those by the world. She is the essential Rasika, the aesthete of passion, and her wild heart belongs only to herself,” she writes.

According to Gokhale, the essence of the relationship between Radha and Krishna resides in its spontaneous acquiescence to the moment of joyous union, and its disregard for imposed social boundaries in love, sacred or profane. This sense of abandonment, of surrender would have been and still is exhilarating and liberating in a prescriptive and regimented society.

“Radha, the bucolic milkmaid, follows the dictates of her heart, of her instincts, her passion, to seek union with her innermost self. She is her own mistress even in the act of surrender to her beloved. And it is this aspect of her that is worshipped, if not emulated, in shrines, temples and festivals all across India even today.”

Among the contributors, Devdutt Pattanaik, points out how the idea of favourite milkmaid reached its climax with the composition of ‘Gita Govinda’, a Sanskrit song written by Jayadeva in the 12th Century AD, in which the passion of the cowherd god and his beloved milkmaid was celebrated in a language and style that took all of India by storm.

“Amorous love joins two lovers on the same level in mutual satisfaction. This equality coupled with intensity makes possible a level of rasa unknown elsewhere. Because of its finite basis, however, this worldly love ultimately gives rise to feelings of disgust and aversion. It cannot lead to infinite and eternal bliss, and it is to this that the human quest tends,” observes Shrivatsa Goswami.

He believes Radha and Krishna, the subject and object of love, provide absolute bliss to each other through their lovely dalliance (rasa). Their mystical union is the ultimate rasa. In it separation gives rise to the pleasure of union, and conversely union contains a loving feeling of separation. (IANS)